Racking up 14 Oscar nominations and seven Golden Globe wins, few movies have received as much critical fanfare as “La La Land.” Written and directed by Golden Globe winner Damien Chazelle, the musical is the colorful and complicated story of old-fashioned Hollywood dreamers in love.

Aspiring actress Mia (Emma Stone) is stuck working as a barista on the Warner Bros. lot, going to audition after audition in an attempt to catch her big break. After a series of brief meet-cutes, she eventually comes to know Sebastian (Ryan Gosling), a struggling jazz musician who dreams of owning his own club but cannot follow rules long enough to hold down a job.

As Mia and Sebastian get to know each other more, their playful back-and-forth soon turns into a genuine and complicated love story. When things start lining up for their futures, they struggle with the decision to follow their dreams or stay with each other.

Musicals can be fairly divisive to audiences—some people love them, some people hate them. However, the music in this film seems more of an afterthought than in most musicals. There are not a lot of songs, but the ones that are included are phenomenal. Think “Singin’ in the Rain” and the duo of Fred Astiare and Ginger Rogers—a sharp, classy, nostalgic trip.

The first scene in the movie opens on a freeway in Los Angeles in the middle of a traffic jam. Amidst the honking, stress and midday sun, people begin to hop out of their multicolored cars, singing and dancing in a single-shot group number. It is easily the most impressive number in the entire movie and sets the fantastical, nostalgic atmosphere that carries on for the rest of the film.

Gosling and Stone have starred in several other movies together, so their chemistry is already existent, though I was a little disappointed by it in this particular film. For me, the peak Gosling-Stone dynamic was in “Crazy, Stupid, Love,” so that is what I anticipated when I went into the movie. Do not get me wrong, they still worked well together, but Gosling had most of the witty, charismatic lines, and Stone’s character came off as a little flat. I do not think it had anything to do with the acting skills of the stars, just that Chazelle may not have known how to write a more convincing female voice.

Aesthetically, “La La Land” is a delight to watch. Chazelle chose colors that pop in every scene, from color-coordinated costumes to dazzling L.A. sunsets. Many of the scenes are backlighted by a specific color, and if I saw the film again I would love to dive into what exactly each hue signifies.

Without giving too much away, I will say that the film is bittersweet and raw, showcasing not necessarily the glitzy optimism of a perfect Hollywood ending, but the grittiness of what hard decisions look like in real life. Some people will probably not be happy with the ending, but it does not aim to make everyone happy. You will be left a little melancholy but enjoy the experience.

All in all, you cannot deny the magic of “La La Land.” 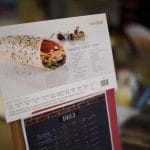