The Red Raider baseball team had its first opportunity of the season to play in front of their home fans last weekend, splitting a four-game series with Midland University. Two of the contests went into extra innings as Northwestern is now 9-14 overall and 3-5 in conference play.

Pitching was the strong point of both teams during the series opener, as NW starter freshman Brady Roberts pitched seven innings with one earned run and Midland’s Andrew Davidson only gave up one through the game’s first seven innings. NW junior Mason O’Donnell earned his second win on the season on one inning pitched and one earned run.

NW junior outfielder junior Colton Harold had the first hit of the game for either team, sending a solo home run to center field to put the Raiders up 1-0 in the bottom of the second.

The game remained a defensive battle as the next run was scored in the fifth inning on an RBI double by Midland’s left fielder Sam Braun. Only two hits were allowed by either pitcher until extra innings as Midland took their first lead of the game off an RBI double by right fielder Dakota Thornton.

Reliever O’Donnell was able to limit the damage by earning the final two outs of the inning with two Warrior runners in scoring position. NW used a two-out rally in the eighth inning to earn the win, led by a double from sophomore Ben De Boer, followed by an RBI triple and a two-run walk off home run by seniors A.J. Nitzschke and Austin Zylstra, respectively.

NW freshman pitcher Brady Roberts had a standout performance in game one of the series, finishing with only five hits and one run surrendered and picking up two strikeouts on seven innings pitched. NW was led on the offensive end by Nitzschke, who went 2-3 with one RBI and one run. De Boer, Zylstra and Harold each had one hit, all proving to be vital to the winning effort by the Raiders.

“It was great to win a game 11-5,” junior Drew Schutt said. “However, we need to improve as a team to be able to fire on all cylinders from the very beginning. At the start of the game, we need our offense, defense and pitching to all be on at the same time in order to be more successful this season.” 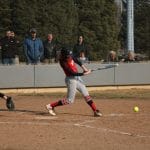