On April 22, the Beloved Festival of Culture Fair will be put on by the I-Core leaders of the international student clubs for the Northwestern student body. Like the many cultural fairs in years prior, this year’s fair will include international cuisine, games and entertainment to celebrate the many cultures of NW’s international community. The event will run from 4:30-7 p.m. and be held in the RSC 4-court area due to anticipated weather. NW students are able to attend the event free using their meal plan, and they are encouraged to since the cafeteria will be closed that evening.

This year’s festival has a packed schedule with many exciting activities for students to look forward to. Like years prior, there will be henna and an international fashion show where students showcase traditional clothing from all over the world. Students will be performing hip-hop and K-pop dances as entertainment. In addition, there will be a variety of games like soccer, five stones, origami, kubb and even dalgona as seen on the hit Netflix show Squid Game. Students can also expect an amazing buffet of food from around the world: tortilla patatas from Spain, bitterbalen from the Netherlands, dorayaki from Japan, chicken korma from Afghanistan, mutton masala from India, chipa guazu from Paraguay, boba tea made with Thai tea and more!

The Beloved Festival of Culture is a merged event between I-Club’s Cultural Fair and the Beloved Festival of Arts and Culture which was an outdoor spring festival that Adebola Adeyemo and Rahn Franklin first began in 2017.  However, NW has been hosting international cultural fairs for a very long time. Kevin McMahan estimates that the celebration of these fairs at NW may be as much as 40-50 years old. The more recent iterations of the international festival have been a big hit in the community, allowing students of all cultures and the larger Orange City community to come together.

The festival has been planned by several student leaders of the I-Core. This year, Elyssa Tang has been leading the committee with Kevin McMahan. To Tang, the festival is truly about celebrating different cultures.

Tang said, “Our community is not perfect, but we want to strive towards one in which its members love and are loved in the fullness of who they are. To me, seeing the beauty of diversity points to a creative and awesome God!”

Be sure to come out and experience something new this Friday from 4:30-7 p.m. in the RSC 4-court! 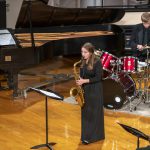 Doing redeeming work through the love of jazz 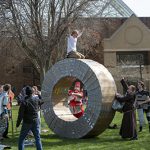