Human trafficking is one of the fastest growing criminal industries in the world, but senior Amie Davis is doing her part to combat this growth.

Working with the Red Thread Movement, Davis sells Red Thread bracelets in an attempt to raise money for sex trafficking victims in Nepal and India. The program assists women of all ages in getting back on their feet after the terror that is the sex-traffic life.

With girls as young as four or five being taken for the sex-trafficking industry, it can be difficult to restart life after leaving the trade. Families often turn them away, and marriage can be difficult after what they’ve experienced.

“This program helps them since they don’t have a trade or anything,” Davis said. “Because they’ve been in the sex trafficking industry for so long, all they know is the industry. The program teaches them different trades so they can make a living.”

The Red Thread bracelets are hand-woven by the women within the program as a way of preparing them for a trade. The bracelets are sold for $3. The sale of one bracelet aids three women in Nepal or India.

The bracelets make a difference in three very important ways, according to the Red Thread Movement website. One way is by providing a fair- trade income for the rescued girls that weave the bracelets. The second way is by allowing additional funds to be used for anti-trafficking border units and safe houses. Thirdly, it generates awareness of the sex trafficking industry and its violation of human rights.

Davis became more involved with the organization this past year after purchasing a bracelet at Lifelight two years ago. Wearing it daily served as a reminder, but it came up again when she took a class on campus called Violence Against Women.

“We were talking about different organizations, and I was thinking, ‘I should really get involved with that organization again,’” Davis said. “I looked online and found their Red Thread Movement information. They sent me the bracelets, and I’m starting to get them sold.”

The site, redthreadmove-ment.org, offers three quantities of bracelets to sell: 50, 100 or 200. Davis has currently sold 15 of her 50 bracelets, thanks to marketing in Fern Smith Hall, classroom presentations and Facebook.

With the Fields of Mudan film that was shown on campus, Davis hopes more people become aware.

“I hope more people get involved, especially after the movie,” Davis said. “There’s so much more that needs to be done. It’s ridiculous.”
Freshman Leah Rekow saw the film and said that even small things can make a difference.

“We may not be able to do anything big to combat sex-trafficking,” Rekow said. “But like Jesus multiplied the loaves and fishes for the 5,000, we can trust God to multiply our actions and make a change in this situation.”

Some students might feel that $3 cannot change anything, but Rekow disagrees.

She believes even buying something as small as a bracelet can make a difference. 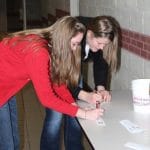 Students step up to Raider Cup 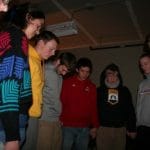 The Vine grows on campus