“Born Here Live Here Die Here,” is the latest 16 track album from the country singer Luke Bryan. For my review, I follow a four-part criterion, first, being instrumentals, vocals, lyrics and overall opinion.

This album was pleasantly surprising and the first track called, “Knockin’ Boots,” brought a bouncy love song that had me tapping my foot the entirety of the song. The instrumentals helped to make this song and the album. Overall, the use of drums and occasional guitar solos really make these songs move the listener to get up and dance. However, that is not to say it was not without the slower songs thrown in that did well to break it up.

The instrumentals have a good way of complimenting Luke Bryan’s singing, and it never feels like there’s too much overlap where vocals and instruments clashed. They always came in at the right moment where neither felt like it was dominating the song.

Much like the rest of Luke Bryan’s songs you can definitely hear that Georgian twang to his voice that makes his singing recognizable. His vocals always fit the songs, and it never sounded like he was going for anything new with his singing.

Compared to other albums I can see how it could be hard to distinguish some of his songs because of how little  is done with his tone and range which he has shown he has. He doesn’t need to make himself unrecognizable, but more to differentiate the songs would be a good thing. Without the different lyrics and instrumentals it would all blend together to me.

The most important part of the album is the lyrics. The hardest part I found with reviewing this album was the relatability of lyrics. Many of them felt stereotypically country which is to be expected to a certain extent. The songs can be broken down into three basic categories: love, drinking and country living.

The love songs were the best songs on the album and what were the most relatable. They were all good at expressing the feelings of the singer and inspire the listener to think about their own life, which was a bit unexpected.

The drinking songs were enjoyable, but there was a catch. They were pretty standard drinking songs just talking about slamming down drinks like in, “One Margarita.” These aren’t songs to sit and listen to while relaxing, but they would be perfect songs to have in the background at a sit-down bar having a few drinks with friends.

The country living songs had themes that ranged from growing up to wanting a boat to small-town vibes. It was all stereotypically country, which were the weakest parts of the album. They were hard to relate to and much of the lyrics were pretty bland copy-pastes of that country formula.

This album deserves three and a half stars because of the great instrumentals that bring the listeners into the songs and the good vocals that left a bit to desire but were still good. What really brought this album down were the lyrics. They were really enjoyable in the love songs and drinking songs, but the stereotypical country songs really brought the album down. 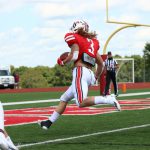