Election day, Nov. 3, approaches fast as people struggle to decide who to vote for this election.

The past two months have been a roller coaster for the American people. Following the first presidential debate, both President Donald Trump and First Lady Melania Trump tested positive for COVID-19. While the vice presidents were able to have their debate, the second presidential debate was canceled after Trump refused to have a virtual debate. However, the final debate was held Oct. 22. Instead of participating in this debate, Trump has been holding rallies in key swing states like Michigan, Wisconsin, Georgia, Florida and even  IA on Oct. 14, the day before the canceled debate, in hopes of securing their votes.

Some still question the reason Trump is refusing to participate in a virtual debate despite him holding rallies. Others also question the effects not having this debate may have on early voters.

“Trump canceled the virtual debate for one main reason: it deprived him of his opportunity for showmanship” said Noah Karmann, senior political science and history major.His decision to tour the U.S. instead is once again a decision to not be constrained.”

Following his positive test, Trump was seen waving at supporters in a vehicle with others in it. Despite the others wearing masks, many have questioned Trump’s decision to ignore the doctor’s advice to avoid others to slow the spread.

Karmann argues that Trump’s downplay of COVID-19 was to show himself as unconstrained, despite this being “because of his $100,000 medical treatment.”

According to the U.S. Elections Project, as of Oct. 21, there have been 41.1 million early votes, 29.5 million of which were via mail. With this many people voting after seeing only one presidential debate, some question whether their votes would be any different if the second debate would have happened.

“This had no impact on early voting,” Karmann said.  At this point, everyone has had more than enough time to make up their mind about the two candidates, especially about Trump.”

Adding to the heat of the current situation was the nomination of Amy Barrett after the death of Ruth Bader Ginsburg. The Republican’s push to fill the vacant seat has frustrated many. People are calling for the seat to be left vacant until after the election, like what was done during Barack Obama’s presidency when Antonin Scalia died.

CNN’s national polling compilation currently shows Joe Biden in the lead according to most sources. Biden is floating just above 50% while Trump is just above 40%. From the last election, we all saw that winning the popular vote does not always win the presidency. Taking into account the margin of error, unexpected voters and the electoral college, there is no counting out either candidate.

While the national polls show Biden in the lead, the battle in Iowa is still fierce. According to CBS’s polling, the two are tied at 49% leaving us as a swing state this election. This makes each vote extremely important as both presidents are fighting for Iowa’s vote.

If you are looking to vote early or absentee vote, the deadline to apply is drawing near. For more information on this, go to your secretary of state’s website. If you are voting in person, polls in Iowa will be opening Nov. 3 and will go until 9 p.m. that night. 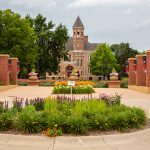 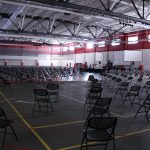