“Naturally, as a poet he commited suicide because that’s the only way a poet can die”

“Its not that I’m committed, it’s just that I’m married!”

– Professor of Chemistry Tim Lubben commenting on why he put so much effort into taking care of his sick cat.

“Didn’t you read the bible? Two unequally yoked people can not be together!”

– Ashley Wright on Tim De Haan being a Pirate and Megan Redlin being a ninja.

Send your Campus Quotes, with context, to beacon@nwciowa.edu.

Embrace the terror: Top 13 ways to give yourself goosebumps 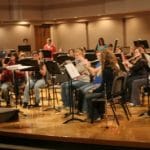 Get jazzy with the Jazz Band and Percussion Ensemble