Car Seat Headrest is the musical project of Will Toledo. The group is an American rock band based in Seattle that burst onto the rock scene through the site Bandcamp with an album Twin Fantasy. The album cultivated devout following and landed Toledo a spot on a record label where he produced three records that received critical acclaim. In late 2017, he decided to re-evaluate his Twin Fantasy record now that he has more resources and time.

Car Seat Headrest’s sound is difficult to describe. The group is a rock band, but their music feels more like vocalized anxiety, confusion and deep emotion than rock-and-roll. Toledo is an intensely talented songwriter equipped with deep insights into what it means to be a young person in today’s world, and he couples these insights with witty observations about the world around him.

The album sets the tone early with its opening track “My Boy.” The song builds slowly with distant electric guitar riffs and Toledo’s falsetto slowly layering in. It gradually swells until listeners are hit with a wall of electric guitar paired with Toledo pseudo-screaming the same lyrics repeated at the beginning of the song. The song sets the tone emotionally as he expresses a deep longing to see the boy mentioned in the song again .

The song also highlights Toledo’s ability to create complex song structures with complex dynamics and his knack for a good crescendo. His music takes on a visceral, vulnerable quality.

The coupling of Toledo’s extremely personal lyrics with this intimate musical style is a phenomenal pairing. The sound of the record is very lo-fi, and the band’s sound has always had a polished garage band feel. The vocal performance on the record complements this style nicely as Toledo does not possess a traditional singing voice. He doubles down on emotion and vulnerability with his vocal performance.

The balance of sound on the record is improved from the Bandcamp original recording and his vocals are easy to pick up, but they do not drown on the instrumentals. The instrumentals and overall sound of the record is a unique take on garage rock with a musical eccentricity.

Highlights of the record include “My Boy,” “Stop Smoking, (We Love You),” “Sober to Death” and “Nervous Young Inhumans.” The cuts on the record range from 12 -and 16-minute epic tracks to shorter tracks that hit hard musically and thematically.

It is unique to see an artist care enough about their work to re-work an entire album. Twin Fantasy provides an opportunity for old fans to remember why they fell in love with Car Seat Headrest, for new listeners to acquaint themselves with the band’s older music and to highlight how much better the band has become over the years. 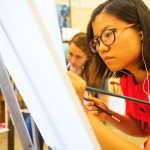