Students are preparing for the annual ugly Christmas sweater party, an event returning for a fourth year.

“This is an unstated tradition,” said senior Amber Maloney. “A Facebook event has been started, inviting everyone at Northwestern. Anyone can join. It is open to all. Even graduates are invited. If people have been invited on Facebook they can also invite their friends to come with them.”

Last year the party was held in the Vanderhill Cottage.

“It was 10 guys that put it together,” said senior Zachary Dieken. “People would just go to Bibles [for Missions] and buy ugly sweaters. We encouraged them to bring anything ugly. Some guys wore turtle necks and others wore sweater vests. People had interesting stories about how they got them from their parents or grandparents.”

Each year there are new elements added to the party.

“Originally we wanted to make a Christmas card of all of us wearing our ugly sweaters,” said senior Jordan Kruse. “We even had a chocolate fountain.”

They also played Christmas music, sang carols and watched movies. Towards the end of the party they put on a light show.

“We had lights on the house and one of the guys timed it to a music box,” Dieken said.

All students are welcome and encouraged to wear an ugly Christmas sweater. 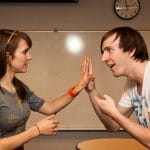