Coach Van Den Bosh grew up in Sioux County where he watched his dad coach volleyball his whole life. He helped coach these teams when he was younger and also assisted the Dordt College volleyball team during his enrollment there. Coach Van Den Bosch has always loved to coach and play. He started coaching right out of college when he moved to California where he coached high school volleyball for six years. He met his wife, who is actually from Sioux Center, while working there. They decided to move back to the area. He then worked for MOC-Floyd Valley High School for a year before he applied for the job he currently holds.

Since accepting this position, Coach Van Den Bosh has led the Raiders to many exciting victories. For him, it’s not about the wins. Instead, it’s about the young ladies he gets to coach. When asked about his favorite thing about coaching, Coach Van Den Bosh said, “I enjoy watching the girls improve, watching the girls reach their potential but also watching them become a team. It’s fun to watch them really enjoy each other and bring out the best in each other.”

One of his past players said, “Coach Kyle always invested one hundred percent into his players. He never treated any of the girls like they were just a volleyball player. He cared about everything that encompassed us as people, from our athletics to our personal lives to our faith journeys.”

The team has had a successful season so far. NW beat DWU in their most recent match and improved their GPAC record 5-0. The Raiders boast a 16-0 record overall this season. 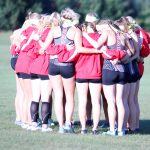