A lot of people get their fill of college in four years. For Colenbrander RD Ryan Anderson, it took nine years before he was ready to move on to bigger and better things. This May will mark the end of his four-year tenure as RD in the largest male dorm on Northwestern’s campus.

Anderson graduated in 2008 from Taylor University with a degree in Elementary Education. After graduation, he made the decision to not pursue teaching.

“I was thinking of other options,” Anderson said. I had had a really good experience living in the dorm; I had loved it, had so many memories and great friends and stuff like that. And (being an RD) turned into a chance for me to help facilitate those experiences for students.”

Living in one building with more than 200 male students had its challenges, however.

“Trying to live a balanced life when you’re surrounded by 200 people living in a dorm, trying to maintain relationships with those people, but also trying to do the things I love to do with my life and creating space for things that are important for me — it’s kind of a crazy pace,” Anderson said.

Learning to balance meetings with all the other tasks of being an RD created a different mindset for Anderson.

“There’s an ever-present sense of responsibility in the back of your head that there’s always more that you could be doing, always another person to talk to, another relationship to build, another event to plan,” Anderson said.

The relationships Anderson worked to build were an important part of his time in the dorm. He leaves with the class of 2013, many of whom he began the journey with at NW. Looking back, he said a focal point is seeing how much the seniors have changed.

“I’ve loved seeing growth in students and transformation,” Anderson said. “There are a few students in particular that I think of, especially when I look at this year’s seniors.”

“You know, we came in together, and now we’re leaving together, and to see the growth of those guys over four years has been awesome.”

Anderson said the guys he had the chance to live with played an important role in his life in Colenbrander.

“I think Coly has changed me in some really positive ways, and I think its influence is going to last in my life a long time,” Anderson said. ”The guys I’ve been able to live my life with have shaped me, and I hope in some ways I’ve shaped them, as well. I hope it’s been mutual in that way.”

After he moves out of the RD apartment, Anderson said he hopes to remain in the area and work as a substitute teacher. Anderson said his ultimate goal for next year is to train for an Ironman marathon.

The Hog Roast on April 24 will be the final farewell to a rewarding and wonderful time at NW, and a career that Anderson said will more than likely remain unmatched for the rest of Anderson’s life.

“I’m going to look back on these four years; I may never have a better job than these four years,” Anderson said. “It’s hard to leave a job like that, but it’s also time for a new perspective, a new challenge. And it’s time to not live in a dorm after nine years in a row of living in a residence hall.” 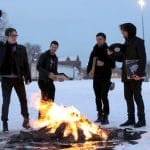 ‘Save Rock and Roll’ drips with nostalgia