“Star Wars,” “Jurassic Park,” “Saving Private Ryan,” “Phantom of the Opera” — it’s all happening in Northwestern’s Symphonic Band concert on Friday. Since the start of the spring semester, the band has been preparing a medley of music scores for concert performance, and this week they are ready to perform the entertaining and exciting mix of pieces on which they have been working.

The concert this month is made up of film scores and musical pieces due to student and band member interest in this type of music.

“I wanted to incorporate something of specific interest and quality,” Director of Bands Angela Holt said. “I think the audience will be able to relate to the variety of selections programmed on this concert. I believe there is something for everyone in this concert.”

This performance will showcase some of famous composer John Williams’ well–known pieces and is especially relevant with the recent release of the new “Star Wars” movie.

With preparing film scores and musical pieces for concerts, the band has faced multiple challenges.

“This concert involves a lot of different styles of music with a plethora of musical transitions, which can be tricky to coordinate at times as musicians,” Holt said.

However, according to Holt, the band has been working hard since the end of Christmas break and has learned the music in a fast and professional way. Even with the challenges of preparing this medley, many band members have said that they had a fun time preparing the music and are excited to share it with others.

Senior flutist Amber Gilpin is looking forward to this performance, especially as her band career at NW comes to a close. Gilpin is particularly excited to perform “Godzilla Eats Las Vegas,” a piece by Eric Whitacre.

“I heard this piece in high school from my band director, and it’s been my bucket list piece ever since then,” Gilpin said. “It takes you through Las Vegas to different clubs and other places, and Godzilla is pretty much stomping on all the places you visit.”

This piece will involve some unique entertainment from the musicians and is an interesting performance to listen to and watch.

The Symphonic Band concert is open to everyone, including students, faculty, staff and community members — all are welcome to attend this free event. This will especially be a fun concert for movie lovers, who can enjoy hearing scores from some of their favorite films.

“The musicians have infused such great character and enthusiasm in this selection,” Holt said. “We will be interested to see how the audience responds to certain familiar pieces, plus the unique sounds, and shall we say ‘happenings’ in the concert.” 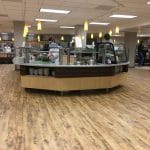 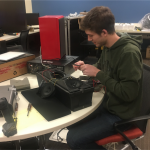