The Red Raider wrestling team traveled to Fremont, Nebraska, last Saturday to compete in the GPAC duals. They dueled three teams in hopes to continue their pursuit at Northwestern’s first ever GPAC title for the wrestling team. The Raiders entered the day tied for first in the GPAC standings.

They started off the day with an incredibly tough dual against the 18th ranked and conference co-leader Morningside College. NW went 3-1 in the first four matches which put them down 14-6. Senior Elijah Dahl had a crucial third period pin that kept the Raiders within reach. The second half of the dual went mostly in the favor of NW, as they won four out of five. Sophomores Daniel Zeleny and Andrew Null and senior Brandon Shuler all fought hard and earned three decisions. Then senior Nick Null came out and earned a huge pin in the first period to put the Raiders up 21-17 with one match to go. NW lost the match at 285 but only by a decision which gave them the big win. This was only the second time in ten years that the Raiders have beaten the Mustangs.

“We are really proud of our guys in the team win against Morningside,” head coach Rik Dahl said. “We had guys take advantages of opportunities and some others step up and play huge roles in the win.”

The second dual of the day against Dakota Wesleyan University also went in favor of the Raiders as they won 42-6. NW won eight out of the 10 matches. Four NW wrestlers were able to tally bonus points to put an exclamation point on their win.

The last dual was not as friendly for the Raiders as they lost 32-15 to Midland University. After the first two matches, the Raiders were only down 6-3, but Midland won the next five matches with a total of 20 points, making the score 26-3. NW took the next two but lost the last match of the day. Nick Null had a nice pin in the first period as he went 2-0 on the day.

The Raiders are still pursuing their first GPAC title as they take on Jamestown College tonight Feb. 2 at 7 p.m. in the Bultman Center. 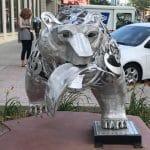 Exploring Siouxland on a budget