For students of the Psychology department, there will be one fewer familiar face next term. Like so many other professors, Laird Edman, professor of psychology, will embark on sabbatical.

His two semesters will be busy because Edman has several projects in the wings. The first semester will be spent in Orange City working on a variety of pieces.

“I have honestly about six articles that need to be finished and worked on, and one or two brand new articles that I want to sort of polish up,” Edman said.

However, Edman will also be focusing on a much larger project, a book on the cognitive science of religion that will be co-authored by Justin Barrett of Fuller Graduate School of Psychology, in Pasadena, Calif.

“He’s probably one of the top three people in the world, maybe the top person in the world, in cognitive science of religion,” Edman said.

Edman will be focusing much of his sabbatical on the book. A majority of the time will be spent reading academic journals, whether they are found in Ramaker Library, through interlibrary loan or at other institutions such as the University of Minnesota or the University of Iowa.

As for the books involved for research, “I can probably list the 20 books in cognitive science of religion that are essential, and I own most of them,” Edman said. “I’m not worried about that.”

Edman will also have research libraries available second semester. After applying for and not receiving the opportunity to spend sabbatical in Turkey, Edman has two other prestigious locations available to him.

“I suspect I’ll be some place,” Edman said. “I would guess either Pasadena, working with Justin Barrett at Fuller or I would love to spend the semester at Oxford, the Center for the Study of Anthropological Study of Religion.”

Both locations would give Edman the opportunity to get substantial work done on the book; this is important because Edman is doing most of the research himself. When Barrett and Edman spoke about the book, the two laid out an effective plan.

“I said, ‘Tell you what, I’ll do the heavy lifting; you consult with me on what needs to go into the chapters, I’ll write the chapters, you edit the chapters, and we’ll go from there,’ Edman said. “And (Barrett) said, ‘Sounds like a plan.’”

“We’ve spent a number of periods of our lives where I was gone a lot during the week,” Edman said. “We spent probably six years living apart during the week. So we would like to arrange our lives so that doesn’t happen anymore.”

Edman said he would prefer Oxford for his second semester. “You know, I really like tea,” Edman said. But if there is more work to be done in Pasadena, he will go there. Either way, he is excited to focus on research in his field, the research that is nearly impossible to do while teaching, grading and meeting with committees.

As for the Psychology department at Northwestern, a replacement professor will be hired for the upcoming year. No decision has been made yet, but it is predicted that whoever is chosen will be teaching freshman– and sophomore–level courses; Jennifer Feenstra will take over Edman’s advanced classes.

His upcoming year looks to be both busy and fulfilling, and Edman is eager for a change of scenery, whether that means no classrooms, the West Coast or England.

“You’ve got to leave for a while,” Edman said. “I think that’s part of what’s valuable on sabbatical—getting away.” 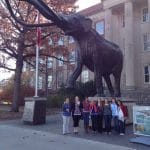 Honors program to be revamped