Emotional journey through listeners’ past

As I consider that first moment I stood before the bust of that great pale giant hanging upside down by its beheaded neck, I cannot ignore the comparison to Herman Melville. Moby Dick; a grand white beast, vast in realms both physical and beyond. The great white head, comparable to the fabled whale even by the complexion of its skin. I am not unlucky enough to have ever borne witness to the bubbling carcass of a whale washed dead ashore, let alone the white whale itself, but I recollect my first encounter with David Platter’s Charting the Self, as the same. It was frightening at first. Where was such a beast hiding? I wondered what a beast so large would do to a tiny man like me. Then I wondered how it died; wondered who killed it.

On the polished floors a friend noticed its reflection appeared, and in search of clarity I laid on my back and looked up at the monster, up-righting it in my view. Then I saw where I had misunderstood the beast. I saw in his great eyes a great sadness. It was not ‘where’ this beast hid, but ‘why’. What judgement from my people had he suffered to drive him so far? And how justified he was—as soon as we found him, we killed him. Wondered not, in morbid fascination, ‘how’ it died, but ‘why’. Not ‘who’ killed it, but ‘why’ they did.

I realized while I laid there on my back that grandness is fragile. It is sensitive and there are many sides. While Charting the Self struck me most, it is only one of many individual works currently on display in the Te Paske Gallery of the Korver Visual Arts Center, all parts of sculptor and artist David Platter’s series Super Fascia. Platter said he has been adding to the series for nearly a decade, and it is ongoing beyond this exhibit, though this is the first time all the works have been compiled in one exhibition.

Super Fascia was installed on August 23 and it will remain for public viewing in the art building until October 8. The Korver Visual Arts Center is open from 7 a.m. to 7 p.m. Monday through Friday and 7 a.m. to 3p.m. on Saturdays. David Platter himself will be visiting the gallery for a public reception on Thursday, September 30 at 7 p.m. He will be around to answer questions and discuss the pieces with those interested.

I had the unique opportunity to email with Platter before composing this tribute to his inspiring work, and he included in his response to me rich and fascinating descriptions of what motivated many of the decisions involved in designing and presenting his pieces. While there is unfortunately not enough time to delve into everything he mentioned, it is worth noting that the title Super Fascia was very intentionally chosen. It shares phonetic similarity with the word ‘superficial’, a term defined by ‘what is surface-level or shallow’. This is not for Platter to imply that his own works are shallow, but rather to call self-aware attention to the ‘top layer’ of his works. In the case of my experience with Charting the Self, how did my superficial judgement of the piece compare to later assessment? In a literal sense, the outside of the piece is smooth, while the inside (which is visible through the mouth and open neck) is rough and the metal scaffolding is still evident inside.

David Platter is a studio artist, sculptor, and educator. Currently he is a professor of art at Dordt University, but he is an international student of the arts and he continues to create art independent of his teaching career. He is passionate about social and civil rights, many homages to which he has created throughout his career. His works are represented in over 40 private and public collections. 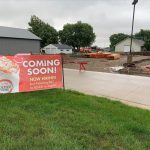