When someone hands their friend a book and says, “Read this, it’s great,” normally it’s a very pleasant experience.

When that book is “The Pale King” by MacArthur Foundation-declared genius Wallace, that friend should give a fair warning as well.

For anyone who has never heard of, or read, any other piece of literature—large or small—written by David Foster Wallace, “The Pale King,” may not be the best introduction. The book was published after Wallace’s editor, Michael Pietsch, pieced together hundreds of pages of notes and writings found after Wallace’s suicide—and it’s a beast.

Scenes are broken into chapters which enter the book in no discernable order, which might be a good thing since the book is likely missing the ending Wallace had in mind. The continuum and unimportance of a timeline makes the story feel bleak.

With little previous exposure to Wallace, it’s difficult to read without feeling buried alive in narrative techniques that are completely foreign.

“The Pale King” delves into the tedium of working for the IRS. IRS jargon, processes and equations spill over into every situation. By integrating the workplace tedium with everyday life, Wallace seems to be saying that the American work life is boring—regardless of your job—and boredom is killing the American soul.

Lives seem hopeless, love is a foreign notion while number-crunching and dull work are the most real elements in the world Wallace has created in the novel.

It’s sad, especially coming from Wallace who likely had deeply struggled with similar attitudes before taking his own life.

Wallace adds a touch of intrigue to the novel by casting himself as one of the lead characters in the story. He creates a false history of his life so vivid, it’s hard to believe the book isn’t really autobiographical.

The most positive take-away from the novel comes from a lesson taught by a girl who has struggled with cutting, depression and self-depreciation.

As if talking to a counselor or close friend, the girl and Wallace share the personal discovery that individuals are the only ones who can give themselves all the respect they deserve. And until knights in shining armor exist again, they are the people that need to do it.

It’s the kind of book that takes a few readings and rereadings to understand. However, with a book this large and challenging, it might take years to even begin to understand the genius of Wallace that his fanatics love to talk about.

In the meantime, maybe try reading something easier by Wallace, like a collection of his essays called “Supposedly Fun Things I’ll Never Do Again.”

It’s supposed to be great. 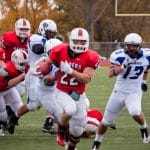