It was my freshman year when I first recognized the divide between the music and theatre departments on Northwestern’s campus. I had just performed for the first time with the symphonic band and the feeling of exhilaration swept over me. It felt so good to perform for the first time with my new ensemble, but I couldn’t shake the sadness that swept over me that night as well. A sadness that stemmed from my inability take part in the fall show Northwestern puts on.

I had previously enjoyed the ability to participate in choir, band and theater and received a rush of adrenaline from participating in each of those activities. I was disappointed to learn, upon my arrival, that I had to choose a department and there wouldn’t be much crossover.

I’m not saying I haven’t enjoyed my time in the symphonic band, I love my band family dearly and the opportunity to create music for God’s glory, but I also find great joy among my theatrical peers. My love for stage management and performing has been cut short because our departments don’t correlate.

In my three years on campus, I’ve watched the same sadness I’ve experienced sweep over many other music and theater students. Some words I hear from both departments are:

“Man, I wish the show and our concert didn’t overlap so I could help/participate in the show.”

“Wow, I miss playing clarinet, but band overlaps with TPE and I’m on scholarship.”

“I really wanted to go support one of my best friends tonight, so they wouldn’t be as nervous but I have to perform.”

I understand there are choices to be made when you enter college and choosing theatre or music is one of them, but this doesn’t just affect the ability to participate. Each year the music department pours their heart out into our first performance at the Homecoming concert and I love seeing theater professors in the audience who come to support, but every year I hear the same disappointing statement from many of my theater peers that they’re unable to come to support us because of their opening show. In the same way, I must repeat that statement and say that I can’t be there to support them and ease their high-strung nerves for their opening night.

This has taken a toll on the students much more than has been recognized. The rift doesn’t exist solely in the performances, the students who have had to make the splitting decision have chosen to rationalize their decision by bashing the other department as a coping mechanism. Anger is a bodyguard to our most vulnerable emotions, the same emotions that come out when something has been removed from our lives that was deeply loved.

I grew up with theater and music, so it felt like part of my heart and identity was being ripped out when I was told to pick one. One Acts are great, but to miss being directed by outstanding professors because of varying reasons breaks my heart. I hope to represent the fine arts industry through public relations after graduation, but my resume pales in comparison to those who have had the opportunity to dip their toe in everything.

Our departments hold brilliant professors with great knowledge and expertise, who care deeply for their students. It’s my sincerest hope that this opens the door for more conversation, and we can come together to glorify God as one body through our support for our respective departments. To the King! 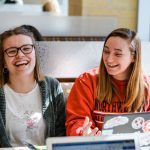