Perhaps the most often noted fact about the record is the set of circumstances that shaped and gave birth to the bands magnum opus. John and Christine McVie were undergoing a divorce at the time of recording while Lindsay Buckingham and Stevie Nicks were dealing with a breakup, the latter becoming involved with the band’s drummer Mick Fleetwood. With all five band members intertwined in relationship issues, it is no surprise that the record lyrically deals with the hardships of love and heartbreak.

However, more so than simply singing about it, the main writing trio of Buckingham, Nicks and McVie expertly put down their emotions and experiences on paper. The songs appear to be snippets and peeks behind the curtain due to a level of vulnerability that is only matched by the musical genius behind each song. It is quite surprising that all five band members managed to come together to craft such a milestone in music in the midst of their personal troubles. Songs like “Go Your Own Way” and “Dreams” exemplify this personal turmoil accompanied by beyond fantastic instrumentals.

Musically, “Rumors” is a triumph. While predominantly existing in the genres of soft-rock and pop-rock, the 1977 record is a glorious mix of both electric and acoustic sounds. The opening to side two of the album and one of the record’s most complicated compositions, “The Chain”, features a lead electric setting one of the most iconic riffs in rock and roll history while being accompanied by an acoustic until the song culminates in an exploding guitar solo.

Other songs like “You Make Loving Fun” bring to light Fleetwood Mac’s ability to deliver poignant and personal lyrics with complete mastery. Buckingham’s guitar work and Fleetwood’s hypnotic percussion elevate the song above simple pop-rock. “I Don’t Want to Know” and the first track on the record, “Second Hand News,” are good examples of acoustic based songs that retain the essence of the band’s folk and soft-rock influences.

Another important component of this record and one of the main reasons for the cohesiveness of subject matter and delivery is the quality of the lead vocals in each song. The record features leads from Buckingham, McVie and Nicks as they take turns taking charge throughout each song. On one hand, both McVie and Nicks offer a haunting quality to their vocals that seems other-worldly at times, especially the latter who shines in songs like “Gold Dust Woman” and “Dreams.” Buckingham on the other hand presents a raw delivery that contrasts perfectly with the female leads. The superb quality of lyricism, instrumentalism and vocals brings the record together in a spotless way.

It would be hard to find any form of negative opinion on “Rumors.” The record won “Album of the Year” at the Grammies that year, sold over forty million copies worldwide, was certified platinum twenty times in the United States and ranked in seventh place on Rolling Stone’s “Top 500 albums of All Time” list.

“Rumors” is a sure-fire hit. Every track on the record is slick and flawless, nothing ever missing the mark or falling short in any way. Lyrically, the album deals with heavy themes that are brought forth expertly by vocal deliveries that remain unmatched to this day. Musically, the record exhibits a proficiency in layering, mixing and overall composition that stands as an example of what can be achieved in the studio. This is a record that should be part of everyone’s education. Fleetwood Mac created in “Rumors” what is without a doubt one of the greatest records of all time. Why Americans call it soccer 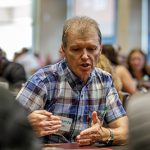