‘Ghosts’ is a direct hit

With the next generation of consoles being released, it was due time for Infinity Ward, developer of the “Call of Duty” series, to finally update their graphics and release the best product they could on the sunset of this generation. “Call of Duty: Ghosts” is just that release.

Players open the campaign as Logan Walker, the son of famed captain Elias Walker. Logan, his father Elias and his brother David “Hesh” are out on a walk near their home in San Diego when their home is attacked from space.

The game cuts to an astronaut at the ODIN weapons space station as it is taken over by the Federation — the fuel-rich, world superpower composed of all of South America. The Federation launches ODIN strikes upon American soil and cripples America.

The next 17 campaign missions take place 10 years after the strike. As the story progresses, it is revealed that one man is behind the attacks: Rorke, a former member of the Ghosts.

The story ending will not be spoiled here, but one thing can be said: it will surprise you.

The saying, “the more things change the more they stay the same” rings true for the multiplayer portion of this latest “Call of Duty.” The gameplay is advanced with the new feature of dynamic maps, which pale in comparison to Battlefield 4’s Leveloution feature. The new competitive modes of Cranked, Hunted and Blitz are welcome additions and are very fun to play with friends.

There is also a new level of customization in the form of Squads — the player gets one soldier (eventually this can be increased to 10) and each can have up to six loadouts and different appearances.

Another new feature is Extinction. Extinction is a four-player Survival mode where the players must destroy alien hives on their way to the Mother Hive where they must then set off a nuke and escape. It provides great fun with friends and plays like Left 4 Dead.

The multiplayer maps are bigger, but the matches are smaller. Although these minor flaws may cause “Ghosts” to take two steps back, it has taken at least three forward. The overall package of “Ghosts” is impressive. It meets and exceeds what most all players have come to expect from a “Call of Duty” game. 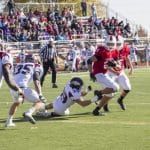 Number one no longer