The departments have been preparing for the Raider Nation Homecoming Concert since the beginning of the year.

The concert will feature the music department’s larger ensembles as well as three student scholarship winners’ performances from last spring. The brass ensemble will be performing, as well as the Orchestra, A Cappella Choir, Heritage Singers, Symphonic Band and Women’s Choir. This will also be Northwestern’s first concert with the new Women’s Choir director, Tim Sailer.

Sophomore Tess Erickson, is most excited to perform George Washington Bridge with the Symphonic Band.

“The music allows the listener to mentally visualize the craziness of traffic and the river down below,” she said.

This concert serves to showcase all the music department has to offer and the audience will also get to hear the winners of the voice, string, and winds scholarship competitions from last spring perform.

One can expect a variety of styles at this concert, including a variety of different languages sung by the A Cappella Choir including Swahili and Paiwan, an indigenous Taiwanese language.

The A Cappella Choir will also be singing a new piece, “For Those Who Love,” based on Romans 8:28, that was commissioned in loving memory of Andrew Paterik by his friends and family. Paterik graduated from NW in 2003, he was the first graduate of the college’s music ministry major. While at NW, Paterik was involved in A Cappella Choir, Heritage Singers, and the Symphonic band. This concert and this piece will be a tribute to Paterik who died in May 2018. He was 37.

Junior Schuyler Sterk is excited to perform with the new choir family, after preparing for a month together.

“It’s fun to make new friends, make new music, and then perform for the first time together,” she said.

Sophomore April DeHaan says she is excited to perform with all the new band members this year.

“We’ve had some great rehearsals so I’m looking forward to a great performance as well,” she said.

For the seniors, this concert ushers in a season of lasts.

“It’s going to be hard with this concert, and the rest of them honestly. This choir has such a unique environment that will be hard to find after I graduate”, said senior Erica Wasson.

Wasson, joined with many other seniors, will savor these moments on stage and remember them fondly as they prepare to leave campus. 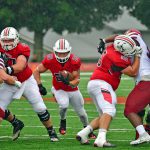 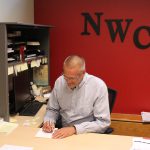