MewithoutYou released their sixth studio album through Run For Cover Records this past June. Fans of the band will know that this album is not simply a reiteration of the same lyrics and same guitar riffs produced by most bands. Pale Horses stands as the next step in the journey of lyricist and lead member, Aaron Weiss.

The album takes the listener into the heart of Weiss in a manner of introspection and cryptic meanings. This is most pronounced in the song “Mexican War Streets” with the lyrics, “Rivers of sadness and mutual need, in the loud desperation of social routine, Rock of salvation lightly esteemed, and distance surging like oceans between us.”

The obscure passages that Weiss fills all his music with talk about the idea of wrestling with God, like Jacob in the metaphor found in Genesis. This blending of faith and self-contemplation is exemplified further by the background tonality of spoken distorted words and soft whispers to quickly yelling the lyrics as if Weiss’s consciousness is being shown to the listeners which produces a feeling of pulsation and meditation.

The season of grief after the loss of Weiss’s father seems to lead him to reflect in “Blue Hen”: “And comfort your family with words like ‘eternity’ and friends made in factories somewhere.”

For Weiss, the emotional duress at the reality of death and sadness in the world is matched by a desire for faithfulness in God. He finds a deep peace in the sense of intimacy in the presence of ultimacy.

Instrumentally, the pace is set through bass guitar strums and snare rim shots, setting the tempo as the lyrics speed up, changing the tonality and mood. The instrumentality fades when the mood of lyric is depicted as dismal or particularly important to the feeling connecting one song to the next.

The album seems like it is meant to be played all the way through in one sitting. The same instrumental patterns at the end of one song fade into the next song, keeping the listener engaged and wanting to finish the album so that the lyricist can finish the story.

Overall the album is a great blend of the previous album’s instrumentality with the lyrical contemplation of a new perspective in a faith journey.

The tempo and emotional transitions blend brilliantly in a musical attempt at expressing humanity’s inmost thoughts and external expressions of peace that surpasses understanding in the realms of faith and spiritual guidance.

Football shuts out in Dakota Dome 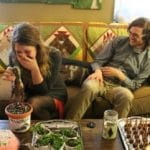 Muggles have a happee birthday