Injuries give Northwestern students the boot Even though the winter months are coming to a close, several students are dealing with the side effects of the season. This is the case for some Northwestern students hopping around in a walking boot.

“I was walking in deep snow and stepped down, and something snapped,” said senior Emily Mahlum. “I thought it was OK, but I passed out when I tried to walk.”

Mahlum found out she broke her outer metatarsal, which resulted in a Jones fracture.She had been walking along the creek with her fiancé’s family when the injury occurred. Although it was unexpected, there was someone willing to document the occasion.

“It’s a pretty funny story,” Mahlum said. “My fiancé’s mom was behind us taking pictures.”

Although some injuries occur due to weather conditions, junior Anna Zeutenhorst has a different story to tell.

“I went to Haiti on a Spring Service Project,” Zeutenhorst said. “The second to last day we were hiking in Haiti and my foot got caught in between some rocks.”

On top of the fact that Zeuntenhorst damaged her ankle in a foreign country, she was also a mile and a half up a mountain in a cave.

“The cave was really slippery, so I couldn’t be carried out,” Zeutenhorst said. “I had to hobble out and Dan Locker, Mike Mabee and Professor Gibler had to help me down the mountain.”

“There were three of us that took turns giving her a piggyback down the mountain,” Gibler said. “We decided to take a shortcut, but it was rugged and treacherous.”

Gibler said Zeutenhorst was a trooper and didn’t complain a single time.

When the Haiti group returned to NW, Zeutenhorst treated her injury as a sprain. She didn’t even visit the doctor until more than a week had passed.

“I didn’t find out it was broken until nine days after it happened,” Zeutenhorst said.

“Safe to say, our respect for her pain tolerance went up when we found out it was a break, not a sprain,” Gibler said.

Both Mahlum and Zeutenhorst ended up in boots for several weeks, which makes being active next to impossible.

“I was so excited to come back after Christmas break to start running and playing basketball, but I can’t,” Mahlum said.

Although many activities are out of the question, there are a few perks that come in handy while wearing a boot.

“The only good thing that has come out of being in a boot is I now have a handicap sticker,” Zeutenhorst said.

“I Am Not A Human Being” is short on good songs 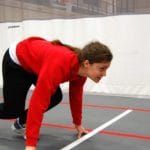