International Club, or I-Club, has been a part of Northwestern for many years. Now, members of the group are bringing something new to campus March 18-22: International Week.

“This is the first year of International Week,” said I-Club leader sophomore Kory McMahan. “Because the Day of Learning isn’t happening this year, we wanted to take the initiative to do something.”

Through a brainstorming session during a training day with La Mosaic, I-Club members came up with the idea for International Week.

“Our task was to come up with a way to bridge cultural understanding on campus,” McMahan said.

I-Club president junior Shuen-En Ho said she wants to use International Week as an opportunity to encourage deeper understanding between cultures.

“We (international students) want to share our experiences,” Ho said. “We don’t just want to find someone we’re comfortable being with. That’s why we brainstormed and came up with the idea for International Week.”

During this week-long celebration of cultures, there will be several activities. Monday will feature International Olympics, hosted by La Mosaic.

“The International Olympics is a fun way for people to explore other cultures in a very non-confrontational way,” said I-Club leader sophomore Trevor Delamater. “The games are a way of breaking cultural barriers in an easy way that will get people interested.”

“I lived in Alaska for 12 and a half years, and we had native Olympics in there,” Wicks said. “We did all these different games that were so cool. I thought ‘I’m sure other cultures have different games too.’ Students don’t always want to sit down and hear things about different cultures, but I thought maybe if they actively participated they would want to learn in that way.”

A movie night with discussion will take place on Tuesday. The I-Club leaders plan to show “Babette’s Feast.” They said their hope is that the movie night will be coordinated with D-Groups. After the movie is played, groups will receive a list of questions to discuss.

Delamater said “Babette’s Feast” tells the story of a French woman who is a refugee in a tiny community on the Dutch coast.

“The movie works through a lot of intercultural perceptions,” said Delamater, adding that it’s also quite humorous. “People don’t have to worry that this will be a very difficult movie to watch. It’s a good movie to watch because it facilitates conversation and raises issues about cultural differences and how we interact with others. We want to see how that could be relevant to our lives at Northwestern.”

Thursday and Friday will be nights of preparation for the Ethnic Fair. I-Club members said they hope to facilitate discussion about different cultures through cooking.

“We need a lot of food for the ethnic fair, and we need people to help cook the food,” McMahan said. “By cooking with other people, we can teach about other people’s cultures.”

“Food brings people together,” Wicks said. “You have more conversations in the kitchen than sitting in a forced discussion session. So we thought it’d be really great to include the campus community in making food for the Ethnic Fair.”

I-Club will host its annual Ethnic Fair on Saturday to wrap up International Week. As is tradition, there will be a buffet with authentic Japanese, Korean, South African, Vietnamese, Canadian, Thai, Colombian and German food. Entertainment will include native dances, songs and storytelling, a fashion show that features students wearing the traditional clothing of their home countries and a “Chopstick Challenge,” that tests contestants skill with chopsticks.

I-Club members said they hope International Week and the Ethnic Fair will make it clear to students that I-Club is not exclusive to international students.

Ho said that everyone is a part of the global village.

“Because of all the convenient technology, the world is getting smaller, and it’s more and more important to know what’s going on in the world,” Ho said. “We need to gain an understanding of different cultures because there are more chances to meet people from different cultures now.”

Ho also said it’s beneficial to have the experience of getting to know people from different backgrounds. Wicks agrees and admits that it is a big feat to approach new people.

“It’s huge to step outside of your bubble,” Wicks said. “We can say that we have friends who are international or are of a different ethnicity, but do we really understand their culture? International Week, Ethnic Fair and I-Club are all chances to experience culture first hand without having to step on a boat or fly across the world.” 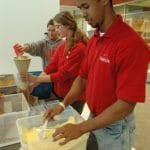