I’ve never been one to intentionally trash another individual. However, northwest Iowa weather really “screwed the pooch” this time. The students who have left the area in the past month should consider themselves lucky to call a place home where the weather is a lot better than in Orange City, Iowa.

Some, however, still do claim that the weather in [insert your hometown here] sucks and that they hate living there. But unless they consistently experience all four seasons in any given week, they can sit back down. The weather in northwest Iowa is by far the least consistent, worst climate I have ever had the sheer misfortune of experiencing.

After all the students left campus on March 18, northwest Iowa once again cycled through all four seasons.  The week of March 23, it was about 40 degrees all week. The next week, the weather ranged from 25 degrees to 75 degrees with rain, wind and sun. The week of April 6 almost had residents convinced that Iowa finally figured out what the term “consistent weather” means; but then, it had to throw in a day with a 30 degree drop. Last week, northwest Iowa weather decided what its citizens really needed was  four inches of snow. Let me make one thing clear. No one, not even Santa, wants snow in the middle of April. The time period of December through March exists for a reason. Send snow then.

Northwest Iowa weather is so inconsistent that people joke about it. One of my favorite memes says, “lol 70 degrees today? Looks like you could use some snow later this week.”

People even write poetry about Iowa weather. One such poem is “An Iowa Poem” by an unknown author.

It’s winter here in Iowa and the gentle breeze blows

Oh, how I love Iowa when the snow is up to my butt.

I take a deep breath of winter air and my nose gets frozen shut.

Yes, the weather here is delightful, so I guess I’ll stick around.

I could never leave this wonderful state because I’m frozen to the ground.

It’s funny because it’s true. Anyone who has experienced the lovely northwest Iowa winters can personally relate to this poem.

I’ve only had the misfortune of living in northwest Iowa for the past five years and I seriously question the sanity of people who’ve lived here their entire life. Do they realize that other places actually have weather that is at least semi-consistent? Although, if that were the case, nobody would live in northwest Iowa anymore.

What I’m saying, northwest Iowa weather, is that you suck at your job. You have become the laughingstock of weather everywhere. On the consistency scale, we rank you a 0 out of 10. Maybe if you could keep the highs of any given week within 10 degrees of each other, we would consider moving you up to a 4 or 5. But until then, Iowa, I guess my dad’s joke is sadly true, “If you don’t like the weather in Iowa, just wait  five minutes. It will change.” 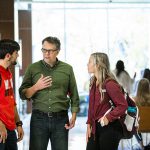