Is NW a Christian College?

What makes Northwestern a Christian college? Is it the fact that we have required chapel? Is it because most of our students self-identify as Christian? Because we talk about God in our classes? Pray before games? Have opportunities available like D-groups, P&W and Hot Faith?

These are all spaces and things that society has deemed as sacred. People would say that having sports team, music ensembles or theater production doesn’t make us a Christian college. They argue that it isn’t the clubs we have on campus or the activities we hold. These are all secular things that our campus wouldn’t say are bad but wouldn’t say are Christian. I would argue that what makes NW a Christian college, isn’t the things that we have, but how we do them.

People have taken God out of certain realms and have deemed those realms as secular. There is now a large chasm between sacred and secular spaces. Even then, we still have all these opportunities for faith formation at our school, but we don’t form faith. This is because the overwhelming thought is that attending more “sacred” events makes you more Christian, or at least more moral.

Andrew Root in his book “Faith Formation in a Secular Age” makes the claim that we conflate faith with a more passionate commitment. We have made involvement the bottom line of what our faith should look like and disregard some of the major calls of the Bible: loving God and loving neighbor. Faith commitment in this “Age of Authenticity” has become performative.

Society then plays God in deciding a moral hierarchy on what is more or less Christian, thinking that what our spirituality looks like is the highest level. I think if we are honest with ourselves, we even place people into boxes based on what our ideal of spirituality looks like. At NW, this looks like a D-group leader and camp counselor who is at P&W every Sunday night. Do not hear me say that these are bad things. I think all of these are good and even great things, what I am saying is that we cannot limit God to these spaces only. We cannot say that these people are better Christians to their counterparts. It places our neighbor into a box, and it also places God into a box.

God does not only inhabit a select few spaces on campus, so to say that you can only experience God at chapel, P&W and D-groups is incomplete. It is possible to experience God on your sports field or theater stage. You can learn about God at club events or in conversations around a LC booth.

In our context, it also further pushes the idea that Western Christianity is the best form of Christianity. It assumes that our way of doing things is closer to God’s ideal, which we cannot know to be true. It also does not leave room for other perspectives or ideas. It pushes a single story, a narrow, limiting view of God, humanity and Christianity.

So, is NW a Christian college? I would still say yes, but not because of chapel, or P&W, or D-groups. I would say NW is a Christian college when we allow God to inhabit both secular and sacred spaces by stepping into the lived experience of our neighbor by entering into relationship with one another. 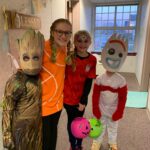 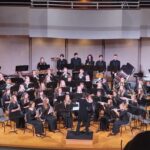 Illusion and music intersect for one night of magic