Kanye West and Jay Z are now referring to their partnership as “The Throne.”

While many would consider that title downright arrogant, it’s a quite fitting nickname—they hold a king-like status in the hip-hop world these days. Their recent release of “Watch the Throne” has sparked a variety of conversations among fans. One thing that is for sure—this album is deep. Its thought-provoking lyrics cause one to listen up and not just hear.

Headlined by “Otis” and “H.A.M.”, “Watch the Throne” is not your typical “money, women, diamonds” deal. Don’t get me wrong—occasional references to Maybachs and sex are there, but there seems to be a bigger picture with this album.

The two have carried on their over-the-top reputations with “Watch the Throne”. Listeners might be surprised when they hear Pig Latin, shout-outs to “South Park,” clarinets and even quotes from the 2007 comedy “Blades of Glory.” Don’t be caught off guard—they threw in things that no one would ever expect to hear in a hip-hop album, but it’s ok—they’re Jay and ‘Ye. They can do whatever they want to on an album, simply because of their status.

The lyricism was striking, though blatantly offensive at times. “The Throne’s” puns and analogies were quite strong. “Lift Off” used the comparison, “When you Earnhart as me eventually you hit a big wall,” negatively referencing to the fatal crash of NASCAR great Dale Earnhart.

Kanye used powerful words in “Murder to Excellence” while describing a period of 41 murders in 50 hours saying, “And I’m from the murder capital where they murder for capital.”

While the creativity was impressive, the depth spoke even louder. “No Church in the Wild” poses the question, “What’s a god to a non-believer, who don’t believe in anything?” Horrific murder stories are revisited in “Murder to Excellence,” asking if urban “black-on-black murder” is genocide, then comparing the stats with combat deaths in Iraq. Jay ends “Made in America” with the powerful claim, “This is the Star Spangled Banner.”

“Niggas in Paris” and the previously released single “H.A.M.” threw down some catchy beats. “New Day” effectively utilized the electronic chant and autotuned sounds from recent works like “Power.”

The rest of the album, however, seemed musically bland.

It was full of soul, yet nothing grabbed my attention. Maybe I expected too much. Musically, “Watch the Throne” was diverse, but I would call it mediocre, considering the artists.

The smaller amount of featured artists was quite noticeable. Notorious for featuring many talents, Kanye and Jay Z showcased only five others throughout the entire album: Beyoncé (the lovely wife of Jay), Mr. Hudson, Otis Redding, Frank Ocean and Curtis Mayfield.

There is no doubt that parts are extremely offensive and language is crude. It’s not the best album to listen to with your parents or share with your little siblings.

You probably won’t enjoy all of it, (I sure didn’t), but you’ll be given the opportunity to respect The Throne’s skills, originality and voice. 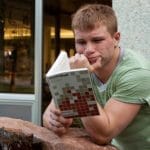