Goodbyes are a natural part of college. Faculty and staff come and go, and at the end of the year, students graduate and move on. However, the constant presence of goodbyes does not make saying them any easier, and many students and faculty at Northwestern are preparing themselves for a particularly bittersweet farewell: Karen and Jeff Barker will be retiring at the end of the spring semester.

The theatre department was affected by recent cuts to faculty and academic programs. The Barkers have had a fruitful career during their 32 years at NW. Both have directed numerous productions, Karen has acted in many shows and Jeff has written many plays produced by NW. Between the two of them, they have taught classes on topics consisting of film criticism, playwrighting, acting, worship arts, theater senior seminar and more. Jeff has been a faithful director of the school’s Drama Ministries Ensemble for many years and the chair of the theatre department, while Karen has been the dean of arts and humanities for some time. Greater than any of these on-paper accomplishments, however, is the impact they have had on their students.

The Barkers’ sacrificial and wholehearted love for their students is obvious in all they do.

“Jeff and Karen teach our students grace by example,” said NW theatre alum Becky Donahue, colleague and friend of the Barkers. “They open their hearts and home to them without hesitation.”

Current students also cite numerous examples of ways the Barkers have guided and loved them.

“Without [Karen’s] affirmation I would have never stepped foot on stage as an actor again,” said Wyatt Waage, who took Karen’s acting class and starred in two one-act plays last semester.

“Being directed by Jeff has made me figure out how to follow my instincts, how to be part of an ensemble and how to step out of my comfort zone and take ownership of roles I don’t feel qualified for,” said Karsten Garwood, who has worked with Jeff in several productions.

While the Barkers have brought meaning to and changed the lives of their students, the roles have also been switched.

“We’ve had so many students who have become lifetime friends,” Jeff said.

These maintained connections have enabled the Barkers to watch their students grow and flourish in their careers.

“I find it a remarkable punctuation that in my final year at NW I got to see one of my students on Broadway: Cora Vander Broek, a student early in our time here. It felt like I’d come full circle,” Karen said.

One of Karen and Jeff’s legacies on the theatre department will be the mantra, “To the King! To the Restoration!” which has its origins in a trilogy of books titled Tales of the Kingdom. Karen and Jeff read the stories before arriving at NW, and they adopted it as a call-and-response in their family whenever someone left the house. Eventually the phrase found its way into NW’s theatre program and has now become the lifeblood of the department.

Before every performance and after the closing of every show, students and staff will yell the phrase as loudly as they can with utterly joyous grins on their faces. Getting a “To the King” tattoo is so commonplace among theatre majors that it could be considered a degree requirement.

There is a bit of irony in the fact that this phrase was birthed as a casual, impermanent farewell and now those who popularized it are leaving NW, but there are no other words so soaked in love, joy and thankfulness that students could impart upon the Barkers in light of their departure. Through this phrase, students honor their beloved friends’ past while also celebrating their excellent future work in the name of our Savior. 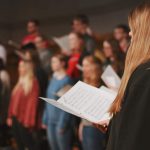 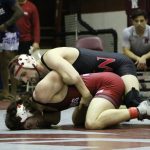