Needing a win to stay in the GPAC title hunt, the women of No. 9 Northwestern went into Sioux City to face No. 2 Briar Cliff Wednesday night.
They rode the scoring of junior Kendra De Jong and a strong bench performance to an 89-88 victory.
The win puts NW’s record at 16-5 overall, 10-3 in the GPAC on the season.
The Chargers led for the entirety of the first half, but the Raiders were never more than 10 points down.
Sophomore Kenzie Small provided eight points in three minutes towards the end of the first half to give the Raiders momentum going into the locker room.
NW’s first lead came with 15:47 left in the second half when senior Kami Kuhlmann hit a three-pointer to make the game 55-54.
“In the second half we tried to take better care of the ball,” junior guard Mallory Cunard said. “We also won the offensive boards, which was big in getting us a lot of second chance points.”
The Raider’s couldn’t pull more than seven points ahead because of costly turnovers, racking up 21 lost possessions throughout the contest.
Briar Cliff was down by four with 1:41 left, and cut the lead to a single point after completing an and-one with 1:31 remaining. The play turned out to be the final scoring of the contest.
A tense atmosphere was partially to blame for the sloppy play at the end. After both teams traded turnovers,  the Raider missed two free throws to close the competitive game.
“I think we all had a little bit of anxiety towards the end,” Cunard said. “The gym was fairly loud and they were putting some pressure on us. Even so, I felt like we relaxed at the end and then finished the game well.”
De Jong provided consistent scoring for the Raiders, dropping 27 points on 10-18 shooting while grabbing eight rebounds and picking up three steals.
Sophomores Small and Sam Kleinsasser provided 15 points each in 25 minutes off the bench.
Sophomore Alli Dunkelberger was team leader in rebounds, ripping down nine. Kuhlmann played all 40 minutes of the game, and added 18 points and six assists.
Despite losing the turnover battle 21-16, NW dominated the rebounding margin, outmuscling Briar Cliff 44-30 on the glass.
On Jan. 18, the Raiders dropped a closely-knit contest with No. 7 Morningside in the Bultman Center 76-74.
Their perimeter defense could not keep up with the Morningside outside shooting, as the Mustangs went 40 percent from beyond the arc. The Raiders were far less lucky, knocking down only 25 percent of their attempts.
De Jong once again led the Raiders in scoring, earning 22 points and nine boards. She also dished out five assists and forced three steals on the night.Kuhlmann added 17 points of her own in a full 40 minutes of playing.
With seven games left in the conference schedule, any loss at this point would be decimating to NW’s hopes of winning the GPAC regular season title.
No. 5 Concordia is currently in the lead with a 12-2 record conference record. No. 7 Morningside is a game behind with their 11-3 record, and then Briar Cliff and NW are 10-3 on the year, tying for third.
After overcoming some early season obstacles, the Raiders have been on fire as of late, and they do not plan on changing their gameplan in the later part of the season.
“We’ll definitely work on details and some little things,” Cunard said. “It’ll be tweaks on defense, but we always focus on what we do well and who we are as a team.”
The Raiders travel to Hastings this Saturday to play the No. 18 Broncos. 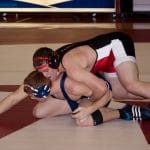