On Monday, March 25 through Friday, March 29, senior art and graphic design major, Lauren Weber, will be displaying her art exhibit in Northwestern’s Te Paske Gallery. A public reception will be held Tuesday, March 26, at 7 p.m.

Weber’s show is titled “Year of Pie.” It is derived from her childhood nickname, along with a few significant events that took place in her life this past year, including her grandfather’s death, her engagement, a 40-day fast and an unexpected pregnancy in her family. There are a number of pieces for each topic.

“These pieces follow the story of how I have been changed while also highlighting a few special people who were a part of my year,” Weber says. “Last year was one that really shaped me into the person I am now, leaving me with different views and perspectives.”

Weber started working on her show during Christmas break. Many hours were put into completing and finalizing her pieces. She spent 12 hours just on her paintings. Weber has been wrapping up and adding the final touches after four months of hard work and dedication.

Weber’s show with be features acrylic paintings and graphic designs done in a pop-art style.

“My inspirations for this show were Keith Haring and Roy Lichtenstein,” she says.

One of Weber’s favorite pieces was a screen print she made special for her cousins. The screen print is of a bear overlapping three times including the colors yellow, red and blue. Another favorite is Weber’s painting titled “June.”

“‘June’ is a Roy Lichtenstein inspired piece that features a crying girl against a pink background,” she says. This piece is just one of the many Weber has dedicated to her grandfather. “The piece is a good representation of the feelings surrounding the weekend of my grandpa’s death.”

While a few of Weber’s favorite products come from the section focused on her grandfather’s death, this event was also one of the hardest to work on.

“I made a point to really think about this event and pray as I went,” Weber says. “His death was unexpected, so processing everything is still hard. It was weird to make these pieces with the fact of him being gone in real life but still here in my mind.”

Weber’s proudest moment focuses around the idea of closure.

“While my exhibit is based around events that took place in my 2018, my purpose behind my exhibit was to pay tribute to my grandfather,” Weber says. “I know he would have loved to be here, so by creating this exhibit, I’m able to use my talents to remember him.”

Weber’s grandfather’s event has the most pieces in her show.

“This is my thank you to my grandpa and I am very proud of how things turned out,” she says.

Weber would love to see as many students, community members, alumni and family come out to support her during her reception at 7 p.m. Tuesday, March 26. “Along with looking forward to the support, there will also be scones made by Josh Dahl,” Weber says. So, come out and grab a specially-made scone while also supporting Weber as she speaks about her exhibit and the value behind a few of her pieces.

Public gallery hours are 8 a.m. to 7 p.m. Monday through Friday. 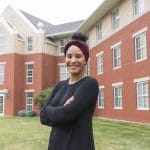 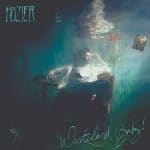