SHARING NAMES AND A ROOM

Northwestern College prides itself on creating places where students feel welcomed and part of a real community. The dorms are usually where students get to know people who are different from them, but this year, there are several roommate duos who have more than a major or favorite TV show in common. In Stegenga and Fern Smith Hall alone, at least four roommate duos have the same first names.

Sophomores Emily Weber and Emily Linneweber are one such duo.

According to Weber, having a roommate with the same first name can be fun: “People are pretty baffled when I say my roommate is also named Emily, so that’s funny,” Weber said.

Weber said one benefit of living with someone who has the same name is that other people are able to remember their names more easily. The baffled looks on the faces of those who first meet the “Emilys” are also fun to see, Weber said. When they first became roommates, Weber and Linneweber hoped to confuse those around them for fun.

“A lot of people ask me who my roommate is and it’s really fun to say I live with another Kelsey,” Lang said. “If they don’t know you, they will probably still remember your name because of it.”

Epp shared similar feelings. “A lot of times, some people’s favorite thing is to say, ‘Hello, Kelseys’ or ‘Kelsey2’ or ‘The Kelseys,’” Epp said. “People love it. They think it’s so much fun.”

But there can be quite a few drawbacks of having a roommate with the same first name, especially if they have similar last names, in the case of Weber and Linneweber.

Because both Weber and Linneweber participate in theatre, people frequently get the two confused.

“People generally assume we’re the same person,” Weber said. “It took the people in Theatre Production Ensemble a while to figure out the difference between us.”

They have had similar experiences in Fern as well. Weber said, “When people knock on the door and ask for ‘Emily,’ we still don’t know who they are looking for.”

For Lang and Epp, the disadvantages of having the same first name are more between the two of them rather than outside Steggy.

Epp said, “If I talk in third person on accident, it confuses Kelsey a lot. I try not to do it, but sometimes it just happens. I have only done it a few times.”

Lang, Epp, and Weber all agreed that sharing their first name with their roommates adds to their relationship with each other. There may be confusion at times, but life with a same-name roommate is quite the adventure. 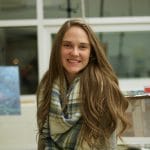 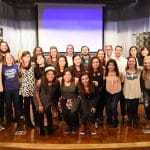