It’s a new semester and the start of a new page for the Northwestern campus. For Northwestern’s A capella Choir, this means some interesting changes.

At the beginning of the academic year, tryouts occur for the many music ensembles on campus. This year, the A capella Choir prepared for the mass number of students departing at the end of the fall semester, to student teaching, study abroads or graduation. Because of this, the amount of students involved in Northwestern’s music program this semester is more than normal to prepare for the losses.

“I know I was super sad to be graduating and leaving so many people I loved,” said Bree Hodnefield, who graduated in December 2020. “I can confidently say we were a close choir.”

Katie Struck, sophomore, comments concerning the loss of choir members, “When someone leaves it’s like we lose a part of our choir family.”

Since many of the members who left were seniors, there is a noticeable gap in student leadership figures in the choir. However, students are finding motivation to still create beautiful sound.

“There were some strong voices and leaders who left,” Junior DJ Nibbelink said “we will just need to work at improving ourselves and step up to the challenge.”

The emphasis on family brought up by Struck has been increasingly felt since NW shut down in-person classes in March 2020. Students within the artistic departments of campus feel a strong connection toward each other, and the music department holds several smaller families within the many ensembles. However, like the rest of campus, students worked to the best of their abilities to make the best of the bad situation.

Hodnefield said, “[Being sent home] allowed us to become close and connected.”

Since returning to campus, the music department has intentionally followed guidelines as well as they can in order to continue making music together. Instead of practicing in the choir room, the members practice together in the band room to allow for better spacing. They also wear their masks while practicing and only take them off to sing when performing.

“The precautions are not ideal,” Struck says. “But if they allow us to make music together, then that makes it worth it in the end.”

Not only are choir members intentionally following the safety guidelines, but they are also being more intentional about exercising kindness towards each other.

Hodnefield comments on the new demeanor of her now past fellows, “Whether [it’s shown by] showing up 20 minutes before choir to hangout and chat, or inviting people to play COVID-19 friendly games, striking up a conversation when passing through the Learning Commons and most importantly checking in on each other,”

Because of precautions being followed, students are still on campus, resulting in the choir being able to plan their participation in a few exciting opportunities. One of those is the American Choral Directors National Convention this March. Because of COVID-19, the convention has decided to go virtual.

“In Mid-March, it will go live to a potential membership audience of 4,000-5,000,” said Dr. Thomas Holm, director of NW’s A capella Choir. “We are really honored and delighted to be a part of this event this year.” 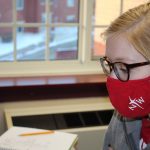 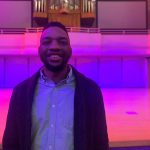