Junior John Lynch at 157-pounds and sophomore Zack Fishman at 165-pounds both qualified as at-large bids after placing fifth in the NAIA Northern Qualifier that was held on Saturday in Fremont, Neb.

“My main focus was to do whatever it took to get the win that I needed to qualify,” Fishman said. “We both definitely have the potential to do well down in Des Moines as long as we perform like we know we can.”

This season, the top four wrestlers from each weight class and 15 at large bids from each of the four qualifier tournaments earned trips to Des Moines.

A transfer student from Pratt Community College, Lynch went 16-15 on the season. Fishman went 24-16 on the season and will be returning to Des Moines after qualifying as a freshman last season.

Fishman was also named to the All-GPAC second-team for his accomplishments on the season. Fishman received an All-GPAC first-team selection last year in the 149-pound weight class.

“I was proud to be named to the team, but my goal was to be an All-American and make the All-GPAC first-team like I did last season,” Fishman said.

The two will compete at the NAIA National Championships in Des Moines on March 1 and 2. 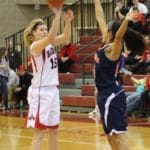