Marvel’s “Black Panther” released in theaters this weekend, and it drew massive box office numbers. The film posted a remarkable $201.8 million on its opening weekend, which is the fifth biggest box office opening of all time.

Before its release, the film was praised by critics for its representation of African culture and the strong role women play in the film. This movie is a big step forward for cinema in terms of advocating for the role of women and for representing people of different cultures, yet it still suffers from typical superhero movie clichés.

The film’s core strength is that it makes great progress toward accurately representing a different culture than what we are typically accustomed to seeing. The hero is not a white male, and he is not saving a damsel in distress. In fact, women are empowered throughout the film, with one of the key fighting forces comprised of fierce, spear-wielding women.

The most refreshing aspect of the film and the main reason for all of the hype is the great strides toward this cultural and gender inclusion. What is even more interesting is that this is happening in a genre that has been filled with straight, white male protagonists for as long as it has existed.

I do not mean to understate the importance of what is stated above, but the film has problems that cannot be ignored. It is also important to consider that films have been moving in the same direction “Black Panther” takes great strides in. Earlier last year, “Wonder Woman” was praised for its casting of Gal Gadot as a strong female lead. Other films have been casting more ethnically-diverse casts recently as well, with “Get Out” being a prime example. This is not to dismiss the importance of the steps in “Black Panther” toward inclusion; it just highlights these cultural shifts.

The movie fails to surpass the norms of the superhero movie genre, which drag down the film’s quality. First and foremost, the dialogue is at best tolerable and at its worst uncomfortable. Characters say things that actual people would never say and react to situations in unbelievable ways. The lines sound like they were obviously written by Hollywood writers trying to make everyone sound “cool.”

On top of the dialogue, the plot is unbearably predictable, and any twists come as no surprise to the astute movie-goer. The film follows the classic Marvel formula of (minor spoilers ahead) conflict, small victory, larger conflict, near hopeless state, miraculous victory. It feels tedious to watch a film and already know the ending.

I feel conflicted about “Black Panther.” On one hand, the film is a huge step forward for Hollywood in terms of representation, and it highlights a minority population in movies. On the other hand, the film stumbles in some very big ways that cannot be overlooked. The film does not ascend into greatness, but it is still a film worth watching. 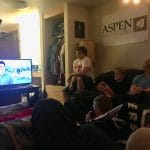