On Friday, Oct. 28th, the black box theater was packed to the point where people did not have seats. The crowd had gathered for Hospers Coffeehouse, one of the most anticipated dorm events of the year. For years, it has been a tradition of Hospers Hall to hold a showcase for various forms of artistic expression through less than eight minute performances put on by residents.

While Hospers Coffeehouse used to be held in the lobby of Hospers, the event was moved to the theater building to accommodate COVID-19 policies in 2020. Since then, the event has continued to be held there because of the large audience the space allows for. Northwestern students are invited to partake in the barista-like attempts of the Hospers residents and enjoy a night of poetry, songs, acts and general tomfoolery. As per usual, the residents of Hospers thrived on that pressure and gave the audience a great college memory to look back on.

Acts this year ranged from Catholic trivia to musical performances to a sword duel, keeping the audience engaged and on-their-toes. The night started with a musical performance from the residence life staff of Hospers, affectionately known as Staff Infection. Next, was a Shakespearean rendition of “Star Wars: The Empire Strikes Back” performed with puppets. Following this were performances of original works including a contemplative song by Josiah Troutner, a heartfelt poem by Collin Verschoor and a complex violin concerto-like performance by Jamie Stoscher. Other performances ranged from a Lego-building contest, a reenactment of the most infamous “Brooklyn 99” scene and a barbershop quartet. As per tradition, the night concluded with a performance from the ‘Family Band’ in which the residents of Hospers played the classic song “Closing Time” by Semisonic. These acts would not have been possible without Jef Meribole , Ben Mayberry and Jackson Kobe working behind the scenes as the AV specialists to make sure all the acts went on without a hitch.

A cherished aspect of Hospers Coffeehouse is how it upholds creative endeavors while avoiding a level of unattainable prestige. Gideon Fynaardt, a resident of Hospers for the past three years, says this is what he enjoys the most about Coffeehouse. “I’ve always loved that Simm emphasizes that coffeehouse is not a talent show. It’s an opportunity for the men of Hospers to make a fun event for the rest of campus. It’s a testament to how much we value hospitality.” While it is a silly and fun event, looking back on all the acts from the thought-provoking ones to the childhood dreams lived out, it is evident how sentimental it is to have this space of self-expression supported by a gracious and loving community of peers. 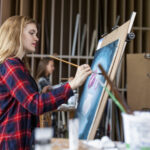 A true artist with a paintbrush and a bright smile 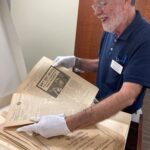 Not your average history paper