Saturday brought another solid outing from the Northwestern cross country team. At the Dean White Invite in Crete, Neb., the men’s team won its second eight-kilometer race in a row, and the women battled for a respectable third place.

The men’s squad recorded 27 points in its victory. It was just enough to beat out Doane, which scored 29. With the meet victory, the Raiders are now receiving votes in the latest coaches’ poll.

“We all work hard in practice and prepare well for competition,” freshman Will Norris said. “I think the main way to keep the momentum going is to be pumped about racing. To love running fast together.”

Junior Skyler Giddings again led the charge for the Raiders. He finished third out of 68 runners with a time of 26:32. Norris was four-tenths of a second behind him and placed fourth.

Junior Logan Hovland placed seventh in 26:41. Sophomore Caleb VanderBaan ran the 8K in 27:21 and placed eighth. Senior Taylor Bodin rounded out the scoring five by placing 10th. He posted a time of 27:33.

The women’s squad finished third out of nine teams with 80 points. Hastings placed second with 77 points, just a stride ahead of the Raiders.

Junior Amber Sandbulte took her turn as the top Raider finisher. She placed 12th with a time of 20:51. Senior Dawn Gildersleeve was only three seconds behind and finished 13th.

Sophomore Kelley Thurman was in the same pack and placed 15th after clocking 21:03. Seniors Jackie Niewenhuis and Janet Pitsenberger were the fourth and fifth runners for the Raiders. Niewenhuis finished in 19th place (21:18), and Pitsenberger just missed a top-20 finish (21st-21:19)

The Raiders next chance to compete will be on Saturday, Oct. 12, in McCook Lake, S.D. 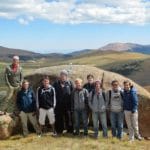