Northwestern College presented “Flourish” as the new theme for NED Talks for the fall semester. The focus is on environmental justice. The talks aim to encourage NW students to make changes in their own lives and push for environmental change. Six talks have already been given on the subject with the last talk scheduled for Nov. 13. During previous sessions, speakers have discussed various topics including the gift of creation, destructive behavior of consumerism, climate change, how to better care for the world, how to respond in global tragedies and how the outdoors impact mental health.

The final talk will focus on how to become eco-friendlier. The session will be led by Ally Pettit, Madison Wingert, Kadence Cruse and Shania DeBoer, who have already encouraged students to participate in an eco-challenge they organized that began on Oct. 25 and will run through Nov. 25.

“I have been encouraged by the talks and have made small changes,” said Anna Teigland, a senior nursing major. “I bring my own mug when I get coffee and I have started to bring reusable bags to the grocery store.”

Students can expect to be challenged while listening and attending these innovative talks. They are designed to integrate faith and learning while stimulating change.

“We hope students aren’t just going through the motions,” said Tanya Vaas, campus ministry administrative assistant. “They do not need to agree with what is being said, but we hope they are willing to be open to what is being said.”

These faith-integrated mini lectures are intended to connect students, NW staff and other speakers to contemplate different ideas and topics. NED Talks also give students another choice to get their chapel credits during the week.

“I like that they are more laid back than chapel,” said Sam Ubben, a junior public relations major. “The audience is smaller, so speakers seem to be more engaged with the audience. The speakers ask for the input from the audience at times, and that is harder to do in chapel.”

Talks are held in the Vogel Community Room in the Dewitt Learning Commons instead of the larger chapel on campus. The smaller environment holds less students, but the more personal setting encourages more interaction with the speaker and audience.

“In chapel you can lose a lot of people. The shorter Ned talks, people seem to be more engaged,” said Kaylee Keogh, a junior public relations major.

NED Talks also offer food as incentive for students to join the discussions.

“NED Talks have a more inviting and intimate atmosphere with the coffee and cookies,” Keogh said. 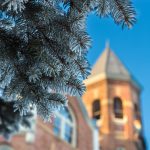 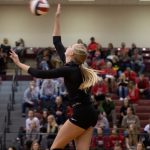