Nerds pretending to fly a spaceship “Artemis Bridge Simulator” is probably the nerdiest thing you could ever do. Or won’t do.

With each player on his or her own screen, a group of six controls every part of a starship. Here’s a peek into the action.

It didn’t work exactly like that. Our science officer couldn’t get a proper reading on the enemy ships’ shield frequencies, so our lasers were useless—not that we were even close enough to use them. Instead, the gunnery officer fired the nuclear missile as soon as we got in range.

A split-second after the nuke had been fired, our helmsman engaged the warp drives, trying to wheel us around for another pass—without permission from the captain.

Captain screamed at him to stop, and he immediately dropped out of warp, which left us in front of the nuke we had just fired and parallel to the enemy ships.

It was too late. The nuke hit the enemy ships, destroying them and almost tearing our ship in half. Engineering reported fires across the whole ship, mostly in the center. The main engine had taken the blow to the side at a time when our shields were focused to the front.

Then we flew into a singularity for fun and to see what it would do. It didn’t do anything besides blow us up. No fancy space-teleporting or reality-bending good times—just explosive death.

It takes a group of six spaceship-loving friends to play the game. Each person gets a computer, which all connect to a server that hosts the main program.

The captain isn’t actually in control of anything. He or she just yells at everyone to get things done.

The weapons officer controls the various weapon systems of the starship, which include mines, lasers of varying frequency and the aforementioned nuclear missiles, among other things.

Engineering is in charge of power monitoring for the weapons, engines, shields and various other parts of the ship, such as the cooling systems, and also directs the emergency team to fix any damaged areas of the ship.

The science crewman is in charge of providing directional headings to the helmsman, who controls the ship direction and drive speeds. The helmsman can also scan down other ships for the weapons crew to fight more effectively.

Communications is kind of an odd duck. They spend most of their time talking to various allied and enemy ships, giving orders from the captain or taunting them into surrendering, respectively. Also under the communications department lies the task of relaying messages and requests for resupplying to any space stations in the near area.

The crew works together to make this starship zoom about and blow up other starships and occasionally complete specific missions or take part in certain scenarios, like sieges on star systems or defense of multiple fronts in a nebula.

It’s more fun than it sounds, and usually involves a good deal of screaming and hollering at one another to get each others’ stations in order.

Some of the positions are somewhat lacking in interaction from time to time. For example, the science officer often finds himself simply waiting for new targets to arrive, which means that sometimes there are slightly-too-long pauses between one interesting thing and the next.

There also isn’t much in the way of graphics—the visual representations of the ships are a bit underwhelming, and the players spend most of the game staring at charts and navigational maps. However, once the yelling starts, you’re in for a time you’ll not soon forget. The game is brilliant in its simplicity, and wonderful in cooperation and chaos.

Nerd it up, everyone. Nobody is too cool to pretend to run a spaceship. 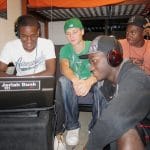