Next fall, Northwestern will welcome two new business professors to campus. Jenny Song and Doug Anderson will join NW faculty in the business department. Song and Douglas will instruct management and marketing courses.

Professor Jenny Song has been living in Newburg, Oregon, where she has been teaching as an adjunct professor at George Fox University. Song received her B.S. in communication engineering from Dalian Maritime University in China, as well as her master of engineering in China. Song moved to the United States, where she went on to pursue her Master of Divinity from George Fox University in Newburg.

After receiving two master’s degrees, Song received a Ph.D. in Leadership Studies from Gonzaga University in Spokane, Washington. Prior to her time in Newburg, Song worked in the IT field for 14 years in China  and served in a variety of leadership rolesin China and at George Fox University.

Professor Doug Anderson is from Kansas City, Missouri. Anderson received his B.A. in political science and history from the University of Iowa and his M.A. in biblical leadership and management from Evangel University in Springfield, Missouri. He has been serving as an adjunct professor online at University of South Dakota for two years where he instructs management classes.

Anderson brings a host of experience from 20 years of work with nonprofit organizations. He has served with many nationally-recognized organizations, such as Teen Challenge, The Salvation Army and Camp Fire. Anderson is deeply involved in nonprofit ministry within the community of Kansas City and the surrounding areas.

NW, and more specifically the business department, is looking forward to adding Song and Anderson to the faculty this fall. Both professors will bring valuable experience from their fields that they will be able to use in the classroom. Additionally, both professors are excited to get to know students personally. They desire to make their faith and relationships with Christ known and to come alongside students in their own faith journeys.

Song and Anderson value the mission of NW and want to help students understand they can make a big impact for Christ and for the kingdom no matter where they land after their time here. 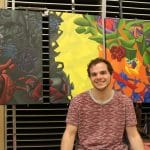