If someone were to mention the artist M.I.A., ,ost people who were once in middle school probably hear the “bang-bang-bang-bang, click AND TAKE YOUR MONEY” from “Paper Planes” run through their mind. While that is probably her most recognizable hit, she’s got some fresh beats just waiting to be heard. The album AIM was released on Sept. 9, 2016, but if none of these songs ever make their way through your ear canals, you might be better off.

The further you get down on the list of songs, the more you start to hear a Westernized Middle-Eastern culture sound. There are songs with a more dance/electronic feel and some with a bit of pop influence, but nothing with too much energy.

There are quite a few songs utilizing sounds that seem similar to many new songs these days, but instead of adding in sounds that create a cool effect, she chooses noises that aren’t necessary. There are many moments throughout the album where you hear a few dope beats with a lot of potential, but those simple moments still aren’t quite enough to make you want to listen until the end. Many could become catchy if you were forced to listen to them over and over, but it’s unlikely any will make it to that point.

A few songs on this album stuck out more than others. The song “Jump In” might remind you of Daft Punk’s “Technologic”, except M.I.A. uses one word over and over rather than DP’s catchy mashup of various action verbs. In the middle of listening to “Survivor,” perhaps the best song on the album, I found myself thinking, “Okay, this song is pretty soothing and potentially dope,” but that’s the last I remember of it because its repetitive softness put me to sleep.

Overall, I think you’ll be generally unimpressed by the lyrics in this album, with a few so horrible they made me consider going M.I.A., if you know what I’m saying. This is apart from the song “Borders,” which actually addresses real world issues in a casual yet effective way. This track brings attention to many political and social problems such as immigration, poverty and gun violence. M.I.A. has been known to be passionate about these issues and use her position as an artist throughout her entire musical career.

This album might make the playlists of a few previous fans but likely won’t attract any new listeners. 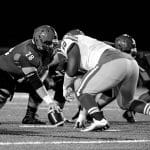 NW rolls through BC