Newsboys United is coming to Northwestern College on Thursday, Oct. 24. The concert will be held in the four court area of the Rowenhorst Student Center.

VIP tickets are $50 and include the following: early admission to the concert, a souvenir tour laminate and a poster, a select question and answer session with the Newsboys and access to a select location for purchasing merchandise for their tour. Further, Platinum VIP tickets can be purchased for $125, and these include the same perks as the gold VIP tickets, but also give you access to a photo opportunity with the band. All tickets can either be purchased online at Eventbrite.com or in the Rowenhorst Student Center bookstore.

Newsboys released their newest album, “Greatness of Our God” in May 2019 and found immediate success. Shortly after its release, it was ranked #1 on the Billboard Top Christian Albums. Popular songs from this album include: “Greatness of Our God” and “Symphony.” Other well-known songs by the band include “God’s Not Dead,” “He Reigns” and “Shine.”

The Newsboys band has an extensive back story. Formed in 1985 in Australia, this band has released a total of 17 albums over the last 39 years. It began as a small group of boys creating music in a garage, their band dubbed the news. Before long, the band evolved into what we now know as the Newsboys. After only a few short years, they were offered a deal by Refuge Communications.

Over the years, the lead voice of the band has changed: originally, John James performed as the lead singer. Since then, he has been succeeded by Peter Furler, and most recently, Michael Tait.

Over the past three decades, the Newsboys have grown from a small boy band that practiced in a garage into an internationally known group, releasing music enjoyed by a wide variety of audiences. Their success has been marked by multiple nominations for Grammy awards and Dove awards, and they have won awards such as “Rock Album of the Year” and “Rock Recorded Song of the Year.”

The tour began on Oct. 6 with the band playing at Grand Canyon University in Arizona and will end on Nov. 19 at LeTourneau University in Texas. This is a rare opportunity to be able to see all members of Newsboys, both past and present, perform on one stage. 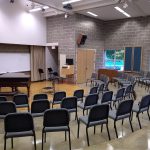 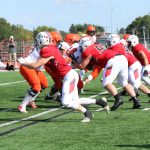