The theme of Ngage this year is life ethics, which encompasses a variety of topics including Adoption (Nov. 14), Death Penalty (Jan. 28), Abortion (Feb. 18) and Mental Health (March 17).

The theme of life ethics and these topics relate to how Christians should think about the sacredness of life, how God wants them to view and treat other people and the dignity of life.

Last school year, a survey was sent out to students who went to Ngage to get feedback on what they would like to hear more about, and “life ethics” was the number one answer. Julie Elliott, vice president for student life got to work on the theme and figuring out what topics would fit under it.

She also has been in charge of choosing and finding speakers to come and share about these issues.  Speakers can be professors or faculty on campus that have some level of expertise on the topic and can be great resources to speak to students, but other speakers nationally known are often brought in as well.

Last week, Kyle Myard Scott from Young Evangelicals for Climate Action came to speak on the connection between food and faith.  His presentation was met with some pushback, as students attending Ngage on Oct. 23 had a lot of questions for him.

He addressed the topic of agriculture and the role people have in the system in what many considered a respectful and sensitive way while also addressing the problems in the current system.

Not everyone who attends Ngage comes away agreeing with everything the speaker said, and they are not willing to leave the topic be.  These 8 p.m. sessions often spark conversation among NW students and lead to continued discussion, which is actually part of Ngage’s purpose.  The whole point behind Ngage is ideas in conversation, which comes from NW’s vision for learning statement, where it reads, “Students will engage ideas.”  These sessions are meant to get students thinking and discussing ideas students haven’t been confronted with before.

“If you only give students what’s safe, then they’re not learning,” Elliott said.

Not all students feel comfortable in chapel, so several years ago the Ngage program was developed to give students more choices to get their chapel credits and benefit from the time they put in.  Elliott believes this has been a positive change, and she’s proud of the role it plays at NW.

“We want students to graduate here having been confronted with difficult questions, wrestling with them, and feeling confident they’ve actually engaged it and come out stronger on the other side.  If we’re going to succeed as a Christian college, we want our students to graduate as thoughtful Christians,” Elliott said.

Elliott herself spoke at the first Ngage of the year, entitled The Gift of Life, where she shared her experiences of being a single parent, adopting and having an unplanned pregnancy in marriage.  She was happy that her session was well-received and enjoyed hearing the positive feedback she has gotten from it.

As the year goes on, students will continue to have opportunities to listen to more speakers and  ask thoughtful questions about life ethics. 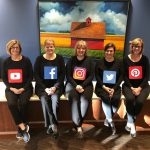