Northwestern’s football squad followed up last week’s blowout win at Dordt with a hard-fought 31-28 home victory against Hastings on Saturday. The No. 21 Raiders put up 14 fourth-quarter points to earn the victory. Their record is now 6-2.

The first quarter belonged to the Raiders. A 30-yard field goal by freshman Julian Dittman and a one-yard plunge by senior Theo Bartman allowed the hosts to sit at 10-0.

The Broncos returned the favor by dominating the second quarter through the air. Two touchdown passes had Hastings up 14-10 and NW reeling at halftime.

On the Raiders first drive of the third quarter, senior Davis Bloemendaal found senior Brice Byker from 11 yards out on a touchdown pass. Hastings responded with a rushing touchdown on the next drive to lead 21-17.

In the final quarter, Hastings extended its lead to 28-17 on a short touchdown pass.

With 7:03 left, the Raiders showed some life as Bartman broke a 22-yard scamper to the end zone. Head coach Kyle Achterhoff called for the two-point conversion, which Bloemendaal tossed to Bartman. The Raiders were down a field goal, 28-25.

The squads traded punts on their next possessions, and Hastings couldn’t run out the clock. The Broncos had to punt once again with 2:56 left.

If there is such a thing as scoring too early, the Raiders did it. It only took them 50 seconds to travel 56 yards and scored the go-ahead touchdown with 2:06 left.

Hastings got into NW territory, and it took a sack by sophomore Court Ecklund and another by redshirt freshman Sam Van Ginkel to secure the Raiders victory.

The Raiders will hold senior day on Saturday against No. 1 Morningside. A loss would surely eliminate NW from playoff contention. Ceremonies will take place before the 1 p.m. kick-off. 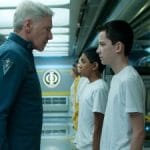 ‘Ender’s Game’ is out of this world