On Tuesday night, the Northwestern women’s volleyball team traveled to Mitchell, S.D. to take on the Dakota Wesleyan University Tigers. The Red Raiders would go on to win in a three-set sweep at the Corn Palace. The NW volleyball team is currently undefeated in GPAC play (3-0) with wins against Dordt (ranked fifth in the GPAC) and Concordia.

The match against DWU started off with a competitive first set (25-21). The rest of the match would be dominated by the Raiders. NW easily took the second set 25-15 and the third 25-19.

The keys to the success for the women’s volleyball team came from the attacking power from sophomore AJ Horstman with 12 kills on the night and junior Lauryn Hilger and sophomore Anna Kiel both contributing nine kills against the Tigers.

Throughout the match, the Raiders had over twice as many kills compared to the Tigers (46-18). NW’s swift victory over DWU can also be attributed to the number of aces on the night (13). Seven of the NW aces came from freshman Makenzie Fink. The Raider defense also had a spectacular night with a total of 39 digs to clinch the victory against the Tigers.

“Dakota Wesleyan is a challenging place to play. It’s a big space with a rowdy crowd, which makes the atmosphere fun. It took us a little bit to get into the game, but once we got into a system things started to go our way. It is always good to get a win on the road. Overall we played great as a team,” Kiel said.

The NW women’s volleyball team looks to continue their winning streak this weekend when they face Doane at 3 p.m. on Saturday here at home. They will also compete at home against Mount Marty on Wednesday, Sept. 27. 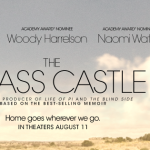 The Glass Castle is just OK