The Red Raider football team earned an explosive victory over the Doane Tigers in front of a full homecoming crowd on Saturday, September 18. Senior Cade Moser’s four touchdown receptions led Northwestern to a 38-0 win, improving to 4-0 overall and 3-0 in the GPAC.

Contrary to their narrow victory over Midland last week, there was never a question who was in control of this game. Sophomore Logan Meyer started off the scoring with a three-yard touchdown run with 7:39 remaining in the first quarter. A 46-yard field goal by sophomore Eli Stader and two touchdown passes from senior quarter back Blake Fryar to Moser extended the lead in the second quarter. Fryar and Moser continued to connect in the second half, scoring on a four-yard reception in the third quarter and an 18-yard reception in the fourth. Junior Konner McQuillan added 102 yards of rushing on 20 attempts, his first time over 100 yards this season.

Moser, a wide receiver from Rock Valley, Iowa, was pleased with their performance, saying, “Blake Fryar did a really good job of putting the ball in great spots for me to make plays. As an offense, things clicked well for us for all four quarters.”

Though the Raider offense put on a show, the defensive side of the ball was just as dominant. Holding the Tigers to 87 yards of offense, senior Jaden Snyder led the pack with four tackles and an interception in the first quarter. Sophomore Parker Fryar and senior Tanner Oleson each had three tackles, and junior Ben Kingery added an interception with a 24-yard return in the third quarter.

Homecoming festivities added to an exciting gameday experience, and Moser noted how special it was.

“This was the most packed I’ve seen a home game since coming to NW four years ago. It was an awesome atmosphere to play in,” Moser said.

NW alumni filled the stands, and a short ceremony was held at halftime recognizing inductees into the Hall of Fame and other distinguished alumni. To round out the game, in appropriate homecoming fashion, the Red Raider Athletic Band played NW’s fight song as players and fans sang along together.

The Raiders head to Seward, Nebraska to take on the Concordia Bulldogs on Saturday, September 25th at 1 p.m. 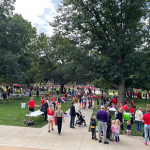 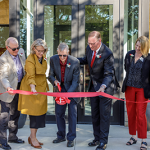