Last week, the men’s and women’s tennis team competed in one of their first matches of the season. The women took a trip for the weekend Feb. 4 and 5 to St. Peter to compete against two tough NCAA opponents where they fell and were given their first two loses of the season putting them 3-2 on the season. The men on the other hand traveled to Mount Vernon, IA on Saturday, Feb. 5, where the team walked away with two wins for the day giving them a 5-1 record on the season.

Friday night, the women’s team faced Minnesota-Mankato, a top NSIC conference team, within the NCAA. In the end we  fallen short and were given their first loss on the season 0-9.

Mankato swept all four double matches, as well as all eight singles matches. Freshmen Julia Kutz and Ainslie Robinson put up a fight in the number one double spot, but ultimately fell 6-3.

Saturday, the Raiders faced Gustavus Adolphus, where they unfortunately suffered their second loss falling 0-9. Kutz and freshman Julie Anderson battled in the number on double spot once again but were defeated 8-5. Kutz took her opponent to a tiebreaker set, but was given the loss by Trebil 6-2, 5-7 and  10-8.

“We learned a lot and we grow when we get these experiences. Overall, I was pleased with how we did. We improved overall, we faced two really good teams and I am proud of the way the girls fought,” said head coach Jaime De Jong.

For the Raider men’s tennis team, they took down Cornell College, 7-2 on Saturday, Feb. 5. Junior Brain VanDen Berg and freshman David Bomgaars dominated their opponents 8-2 in the first double spot.

Northwestern swept all six singles against Cornell. In the number one spot, VanDen Berg won 6-7, 6-2 and 1-0. All the other matches were one in two sets.

Following the win, the Raiders defeated Loras College with the same score, 7-2. VanDen Berg and Bomgaars put together a dominating performance winning the number one spot 8-3. Freshman Collin Harmelink and senior Juani Mackrey took their match 8-3.

“It was a great day for the Raiders! By far the best tennis we’ve played since I’ve taken over the program,” said head coach Monte Tilgner. “Number one double came out of the gate very strong and played two very solid matches. All together both wins were great team wins.”

The men’s team will get back in action on Thursday, Feb. 17 in their first GPAC match against Mount Marty. The women will head to Sioux City going head-to-head against Grand View on Friday, Feb. 18. 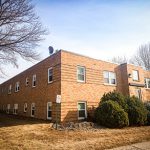 The History of Kepp Hall