The Raider men’s basketball team came out victorious in a 97-79 win against the Midland University Warriors on Nov. 21. Midland, sitting at 1-3 in the GPAC and 1-4 record overall, didn’t stand a chance against the Raider men.

In the first half of the conference matchup, Northwestern shot field goals with 50% accuracy, netting 18 in total. Complimented by five solid three-point shots, the team put up a strong offense against Midland. Though the game started off with a basket from Midland, by the end of the first half, the Raiders had secured a modest lead, with a score of 42-34 at halftime.

The Warriors began the second half with the basket, but the Raiders came back even stronger, with 22 field goals and nine free throws. NW boosted their accuracy across the board and led them to finish the game with a near 20-point lead.

Senior forward Craig Sterk also shot a career high, bringing in 28 points total for the Raiders. Other leaders on the court included senior guard Jay Small who added 14 points to the Raiders score, and freshman forward Alex Van Kalsbeek who netted 20 points total and had five rebounds and three assists.

Coach Kris Korver was impressed with the game the men played, and he attributed the win to their selflessness and teamwork on the court.

“Guys recognized good match-ups, guys shared the ball, guys played for each other,” he said. “They are a joy to coach.”

This win makes the Raiders 2-1 in the GPAC and 4-1 overall, as they seek to continue their two-win streak. The men’s basketball season is just getting started, and their next home game is against the Hastings College in the Bultman Center on Saturday, Dec. 5th. 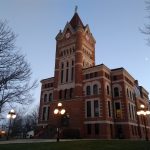