The Northwestern men’s soccer team is making history this season. The men are currently 11-1-1 on the season and 7-0 in the GPAC. They are the No.1 team in the conference, ranked No. 21 in the nation and are only moving up in the ranks.

Their only fall was a 2-3 loss to William Penn, who competes in the most competitive conference in the nation. William Penn previously downed Missouri Valley, the current No.1 team in the nation and defending national champions. It goes without saying that NW can hang with the top of the competition.

“Being the first NAIA player of the week in men’s soccer history is a huge honor. It says a lot about how I am playing this year, but more importantly it tells the story of all the guys in front of me. The defense has played incredible this year, and the offense has been dangerous making it that much easier for us defensively. This truly was a team award and shows the direction this program is heading in.”

The dangerous offense that Foltz speaks of is headed by fifth year senior Juan Mackrey, who leads the Raiders with six goals on the season. Mackrey has also been named as a GPAC offensive player of the week this season. When asked what he attributes this year’s success to, Mackrey simply states,

“I think the success of this year comes from how hungry the returners came back from last year, and also the addition of a great group of freshmen who directly contributed to make us a stronger team.”

Having a deep, talented team and making history isn’t all the Raiders want to be known for. Head Coach Dan Swier shares the team’s season goal,

There is no doubt that the NW men’s soccer team is having a groundbreaking year. They are hungry for that national tournament bid and, by the looks of it, will stop at nothing to get there. 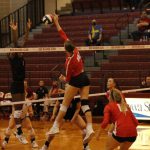