The Red Raider softball team (10-0, 0-0 GPAC) has had a phenomenal start to their pre-conference season so far. They have had 10 games going undefeated in all. With high hopes for the season, the Northwestern softball team looks to further their win streak.

The pre-season began on Saturday, Feb. 5 where they went up to Austin, Minnesota at Packer Dome to play two games against Waldorf. The team walked away with two easy wins beating Waldorf 15-0 in the first and 9-2 in the second.

The following week the Raiders went up to St. Cloud, MN on Feb. 11-12 where they participated in a tournament. They went head-to-head twice with Bemidji State, Sioux Falls and Southwest Minnesota State. In the first game against Bemidji, NW beat them 6-3.. The second time, they won 6-5 in a harder fought game. NW had a nice win against Sioux Falls 3-0. Lastly, they walked away with their fourth win of the day against SMSU, a hard-fought game coming close but ending 7-6. This pushed their win record to 6-0.

On Feb. 18-19, the Raiders had their hopes high going back to the Packer Dome in Austin, Minnesota where they faced Viterbo in three games and Clarke in one. Their Friday games were both against Virterbo of Wisconsin where they defeated Viterbo 11-0 and then again 12-2. The next day they faced Clarke winning 6-5. With one game left of the long weekend, NW faced Viterbo one last time beating them 8-1 to push their undefeated record to 10-0.

The team is led by Seniors Jordyn Kramer and Emily Strasser. The Raiders look forward to their season and to push their win streak further. NW will travel to face their fifth NCAA Division 2 opponent Missouri Western State University (3-7, 0-0 MIAA) in St. Joseph, Missouri on Feb. 25. The first pitch of the game is set for 1 p.m. 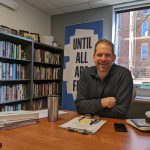 A designer cultivating the art of theater with joy