What started as personal reflection for Northwestern senior Kati Heng soon became an advanced writing project that was recently published on an online literary journal, NewerYork.com.

Entitled “New Jellyfish Lives,” Heng’s work was inspired by the recent diagnosis of a close family friend. Lori, the mother of Heng’s best friend, was diagnosed with stage four pancreatic cancer in October 2012.

“(When Lori was diagnosed) it was all I had on my mind,” Heng said. “I wrote about it to get it off my mind. I couldn’t even think about other things.”

Heng said Lori was the third person to see her in the hospital when she was born. Heng describes Lori as a “second mom.”

“Lori was the best,” Heng said. “She was always super fair and so chill. We always went to Heidi’s house to watch movies and have parties because Lori was the best host ever. You could never leave hungry. She’d always be shoving food at you.”

Heng’s relationship with Lori deepened over the years.

“When I got older, it was really cool because I’d talk to her adult to adult,” Heng said. “She would get up early and walk their dog, and we’d just stop and talk when I ran into her. She was awesome.”

Although Heng’s work was inspired by Lori’s diagnosis, she said she wouldn’t necessarily refer to the process of writing this piece as therapy. Rather, it was simply an outlet for her to think through the things that were going on around her.

“I didn’t want to say my horrible thoughts to my best friend,” Heng said. “So I said them to myself instead.”

Through this verbalization of Heng’s “horrible thoughts,” she was able to create a story of two characters wrestling with questions about life and death. This was illustrated through dialogue between therapist John Lindgate, who has been recently diagnosed with pancreatic cancer, and his patient, Michael Mansford, a 20-year-old struggling with chronic depression.

“The therapist was based on Lori,” Heng said. “At the beginning, she was just really calm about it. When she was first diagnosed, she didn’t really understand. The other person was kind of my own horrible thoughts.”

One thing Heng explained about pancreatic cancer is that it confuses a person’s hormones and releases hormones that cause depression. With this in mind, Heng pictured Lori as if she had been younger when she was diagnosed.

“I imagined more of the depressed side,” Heng said. “Like, ‘What’s the point of even doing the next five months?’ I imagined that side of her that didn’t want to sit around and wait to die. I imagined all of the horrible things that people don’t usually say out loud.”

“I was super excited,” Heng said. “It was my first time not getting an email that said ‘we liked your work, but it didn’t fit with our style.’”

The fact that other people would be reading Heng’s piece gave more meaning to her work.

“I didn’t want to be that kind of writer who went to college to work on something that couldn’t be used in life,” Heng said.

Professor of English Sam Martin advised Heng during the course of her project. He said even though Heng’s work is depressing and tremendously sad, there’s humor and vitality in the piece.

“Having some humor is like a life jacket,” Martin said. “It keeps the reader from drowning.”

Martin also said he was impressed with the amount of work Heng was willing to put into her project. He said she went beyond what the course asked of her.

“My goal is that the writing is at a level at the end of the course that students want to send it out,” Martin said. “When you commit to an art form and put that much into it, something will come of it.”

Through her piece, Heng said she wants to remind people that life is about caring for one another.

“Even when you don’t think people care about you, there’s still those people who do and want to listen,” Heng said.

On March 21, Lori lost her battle with cancer. Heng said she wants Lori to be remembered for her compassionate nature.

“Lori’s that person who cares for strangers,” Heng said. “She’s everyone’s therapist, so it was natural to write her as a therapist. The therapist is going through all his own stuff, but he’s still willing to sit there and listen to someone else talk about their own feelings. Lori was such a caring and compassionate woman of God. Even as she went through chemo and cancer, she was always more concerned about her family, friends and neighbors before herself.”

Heng’s work can be read at theNewerYork.com. “New Jellyfish Lives” is a two-part piece. 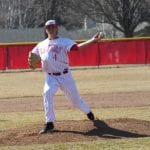 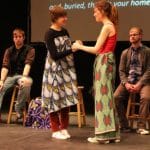 Final chapter of trilogy to play