NW surprised in first round upset

The Raider men’s basketball team fell to Cal Maritime 76-54 on March 7 at the NAIA National Championship in Point Lookout, Mo. With the first-round defeat, the Raiders ended their season with a 24-7 record.

Northwestern came out flat and never recovered from the early slump. The Keelhaulers opened the game on a 9-2 run and continued to build on their success to halftime, by which time they led the Raiders 32-18. It proved to be too much for NW to overcome.

Like he did many times throughout the season, senior guard Ben Miller led the Raiders in scoring with a game-high 23 points. Miller also grabbed 11 rebounds. No other Raider managed to reach double figures in scoring. Apart from Miller, the squad only managed to score 31 points.

“We were never able to get into a rhythm offensively,” Miller said. “We played the game at their pace and weren’t able to put pressure on them.”

The Raiders shot only 28 percent from the field, which marked a season low. They also shot a mere 23 percent from three-point by hitting only five of their 22 attempts.

“It simply came down to the fact that we expected it to be an easy game and they came out ready to play against us being a highly ranked team,” said senior post Daniel Van Kalsbeek.

Three National Tournament appearances and two GPAC titles were the highlights for this group of seniors. All received playing time in multiple years during their careers.

Van Kalsbeek was GPAC Freshman of the Year in 2010 and picked up his third All-America honorable mention this season. Miller received three All-America accolades as well.

“It has been an extremely fast but extremely fun four years,” said senior forward Jacey Hoegh. “I have shared a lot of awesome moments and memories with some great teammates.”

Some of those memories include on-court success.

“Reaching the National Tournament for the third-straight year, as well as winning another conference title, made for a very successful year,” said senior guard Josh Vander Plaats. “It was unfortunate with the way it ended, but we made a lot of great memories along the way.”

“It was great building these relationships for the past four years, even if we never did win a championship,” said senior post Stu Goslinga.

“It has been very enjoyable watching our team compete and improve throughout the season,” Miller said.
Miller finished his career as NW’s seventh all-time leading scorer with 1,803 career points. He finished fourth with 915 rebounds and eighth in assists with 447.

Van Kalsbeek finished ninth all-time with 1,770 points and first in blocks with 106. 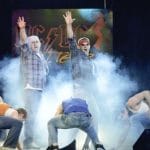